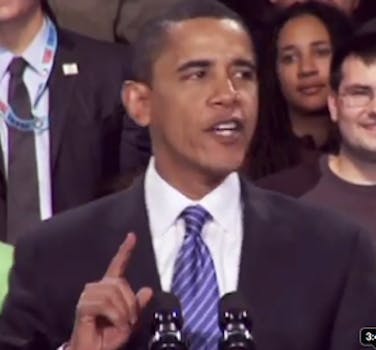 Pres. Obama recounts “The Story of Us: Five Years Ago Today”

On the fifth anniversary of his campaign announcement, President Obama reflects on the shared connections and highlights of his first term.

“The Story of Us: Five Years Ago Today,” posted last week, captures the fifth anniversary of Obama announcing his candidacy and tells the story of the last few years through the lens of social media.

All of the obvious highlights are there from the campaign: the announcement, the surprise win in Iowa, and election night. Moving forward into the presidency, the four-minute-long video notes the challenges the White House has faced but also its accomplishments, including passing universal health care, repealing Don’t Ask Don’t Tell, and killing Osama Bin Ladin. None of that is a surprise, but the video also highlights some of the unscripted moments of the Obama Presidency, including the president taking out a fly and Vice President Joe Biden dropping some off-color language.

While his Republican competitors battle it for votes and likes, Obama already has a massive following on social media: 25 million likes on Facebook and 12 million followers on Twitter, while 464,370 people have added him to their Google+ circle.

Of course, likes and follows don’t equal votes. But it does equal reach, something his future Republican challenger doesn’t have, at least not yet. As with every election, getting your message out to the voters is what matters most, and it doesn’t matter if it’s with a piece of mail, a handshake, or a Facebook note.