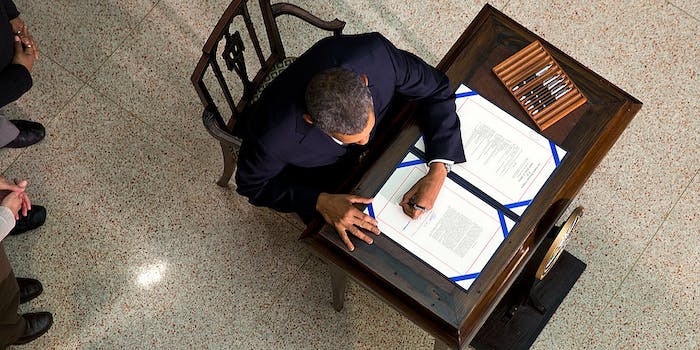 The Obama administration will reportedly send a major cybersecurity bill to Congress, aiming to severely restrict what tech companies can do with user data.

Multiple anonymous sources who were briefed on the measure by Administration officials told Politico reporter Tony Romm that the legislation would require Internet companies to get permission before gathering, sharing, and, in some instances, using in a way significantly different from which it was collected, users’ personal data.

In addition, the bill would expand the authority of the Federal Trade Commission (FTC) to police privacy violations by allowing the agency to issue civil fines to companies found misusing the data of their customers.

While the legislation, which the White House is said to be planning to send to Congress next month, is aimed at giving individuals greater control over their online data, sources told Politico it doesn’t go nearly as far as the “right to be forgotten” rules imposed by the European Union last year.

The president has spent recent weeks pushing a number of legislative and regulatory fixes to the way information is handled online.

Speaking at the FTC earlier this month, President Obama proposed a “Consumer Privacy Bill of Rights” that would, according to VentureBeat, “give Americans the right to decide what personal information gets collected and how it gets used. It will also demand that American consumers have the right to have their information stored securely.”

For many of the largest and most prominent firms on the Internet, most notably Google and Facebook, giving users free access to their products and “charging” them via an unprecedented amount of data collection that is then provided to advertisers has become their primary business model.

As such, any attempt to place significant restrictions on how consumer data is used will inevitably be met with significant opposition in Congress thanks to Silicon Valley’s rapidly growing lobbying operation.