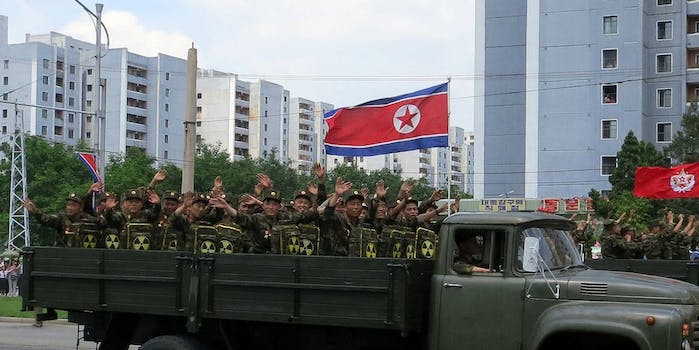 North Korea is at it again. As the diplomatic furor over Seth Rogen and James Franco’s new film, The Interview, increases, the Asian dictatorship has now threatened war against the United States should it be released.

The movie, which focuses around Rogen and Franco plotting to kill Kim-Jong Un while undercover as journalists, has caused widespread tension, and has already led to multiple threats made against both the filmmakers and the U.S. government.

Speaking to the state media agency KCNA, a North Korean foreign ministry spokesperson said that releasing it would be “an act of war” and promised “merciless” retaliation. Commenting on the premise of the film, the spokesperson said that “making and releasing a movie on a plot to hurt our top-level leadership is the most blatant act of terrorism and war and will absolutely not be tolerated.”

While the threats may be worrying for the filmmakers, it is certainly giving them a lot of free PR. The threats are also well-timed as the trailer of The Interview was recently released earlier in June.

The Daily Dot reached out to the DPRK Embassy in London on their threats of war; however, the spokesperson said that it had “no comment, and that we should read their statements more carefully” in the future.

Photo via Flickr/rapidtravelchai (CC BY 2.0)