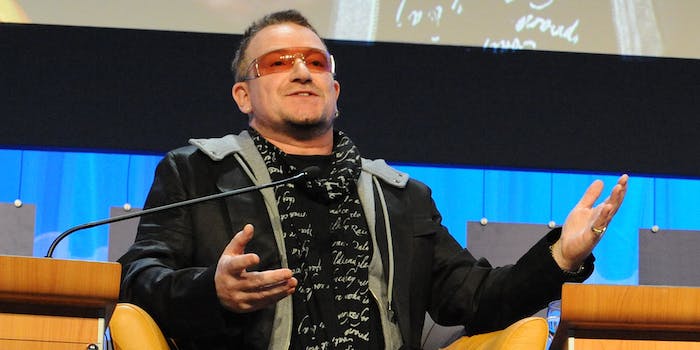 The gift no one wanted.

When Apple announced the iPhone 6 and Apple Watch last week, the Internet fell into a frothy wave of emotions. There was joy and worship at the altar of Apple’s latest offerings. And then people started to realize Apple had added U2’s Songs of Innocence to customers’ iTunes, sans any other warning than the announcement.

And there was much wailing and gnashing of teeth. 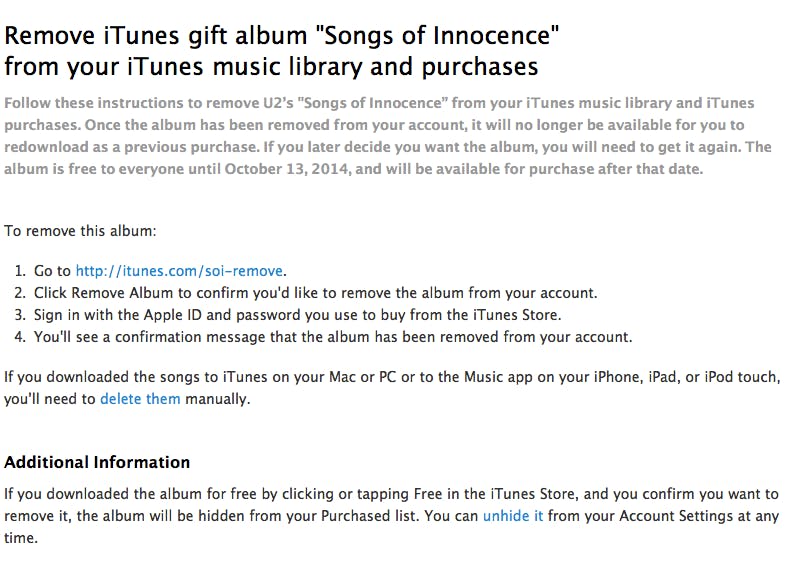 Apple spokesman Tom Neumayr told Re/code that “some customers asked for the ability to delete Songs of Innocence from their library.” Yes, “some.”

People hate U2 so much that Apple had to make a step-by-step guide for how to delete that album from iTunes. https://t.co/zoKhpfd1PJ

Apple actually made a tool to remove the U2 album. Someone had to code this, probably over the weekend https://t.co/HCKTqirIeV

Amazing: Apple have made an official U2 Remover, like it was malware. I used it twice, just to be sure. https://t.co/ZFGA95WJq3 (via @tef)

Apple promoted the album as a “gift,” but many customers were more upset about the far-reaching, unseen hand of Apple invading their cloud to deliver users a shiny turd. Even Billboard is ignoring the album.

Writer Eric Harvey has a great essay about how U2 used to be masters of the big reveal, of larger-than-life tours like Zoo TV. He explored their relationship with Apple, and reminded us the company debuted the U2 iPod at their 2004 event. Subsequently, no one bought that. So why were people so upset about a free U2 album? It might be that U2 is now a brand, and the album wasn’t so much a “gift” as a business move for U2. Just before the release, lead singer Bono smugly told Time, “I don’t believe in free music. Music is a sacrament.”

Harvey goes further into the history of these types of stunts, and why this one stunk so bad:

Unlike Radiohead’s In Rainbows “tip-jar” stunt, or Frank Ocean’s Channel Orange and Jay-Z & Kanye’s Watch the Throne surprise online releases requiring credit card charges, Songs of Innocence managed to come out of nowhere while still feeling overly calculated. What’s worse is that it was boring.

Because this overly calculated borefest was forced upon users, confusion turned to resentment in the days after its covert release. This sentiment was perhaps best illustrated with this tweet:

So Apple caved to pressure and customers can now remove this sticky piece of corporate commerce from iTunes. For a company so apparently tuned in to what their customers want, this was a tone-deaf move, especially in the wake of a potential iCloud hack. Apple pointed out their branding idea was basically a virus people desperately wanted to get rid of.