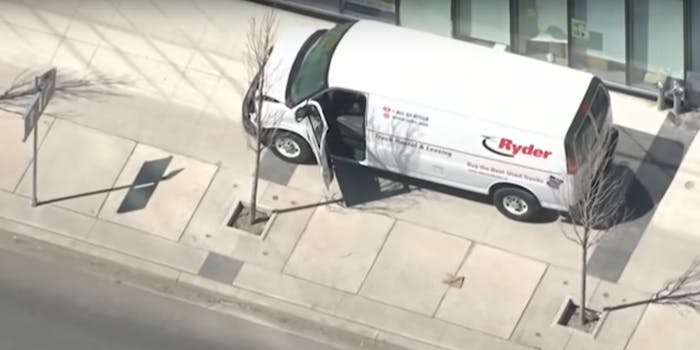 The suspect was arrested by Toronto police.

Police have confirmed that nine people were killed and at least 16 injured on Monday afternoon when a van mounted a sidewalk to strike multiple pedestrians in Toronto, Canada.

Aerial footage of the scene, quickly locked down by police and emergency paramedics, showed several bodies covered in orange blankets and the injured receiving medical attention.

“There was a lot of blood flowing,” one witness told the Guardian. “Everyone was in sheer shock.”

“People, fire hydrants, there’s mailboxes being run over,” another said, describing how he tried to alert pedestrians of the coming vehicle. “I witnessed at least six, seven people being hit and flying in the air, like killed, on the street.”

The driver fled but was arrested by police just over a mile from where the first collision happened, a Toronto law enforcement spokesperson confirmed.

A tense standoff between the suspect and police followed, recorded by a nearby witness, in which the male suspect insisted that he was armed and that officers shoot him.

The suspect was then successfully arrested without shots being fired.

Police were not willing to state whether they believed the incident was deliberate or not. Meanwhile, injured victims have been arriving at the city’s hospitals.

“The investigation is at a stage where no further information can be confirmed at this point. The police are conducting obviously their thorough investigation to determine what happened and why it happened, the motivations involved,” said Ralph Goodale, Canada’s public safety minister.

In recent years, individuals have perpetrated similar vehicle rampage attacks in New York, the U.K., Spain, and France. In the city center, as the incident took place, world leaders were conducting meetings ahead of the G-7 summit due to take place in Canada in June.

“Our hearts go out to everyone affected. We’re going to have more to say in the coming hours,” Canada’s Prime Minister Justin Trudeau said following the incident. “We’re still gathering information, and as soon as we can we’ll share more information with Canadians.”