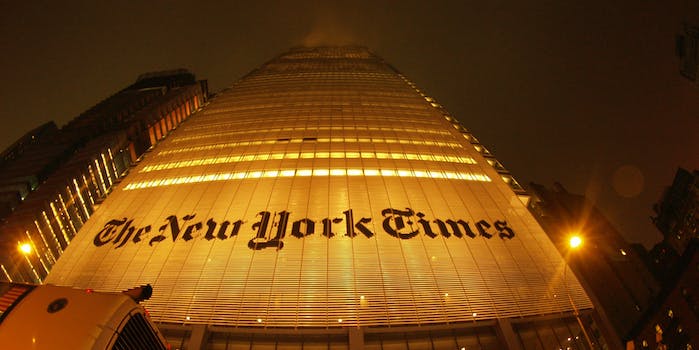 The managing editor for the New York Times said that the latest Edward Snowden leak was not a significant or surprising story.

The managing editor of the New York Times said that the latest Edward Snowden leak—revealing that the U.S. National Security Agency gave raw intelligence to Israel—was not “significant or surprising enough to cover.”

According to a post by the Times’ public editor, Margaret Sullivan, many readers had been complaining that the Times didn’t report on how the U.S. made a secret agreement with Israel to provide intelligence on American citizens without restrictions on its use.

The data agreement appears to contradict U.S. president Barack Obama’s assurances that Americans’ information captured by the NSA was closely guarded by the agency.

Sullivan, who disagreed with Times managing editor Dean Baquet’s decision not to cover the story, shared a reader’s letter that chastised the paper:

48 hours and there is still nothing in the Times about how the NSA shares U.S. citizens’ raw communications data with Israel. This explosive story ought to be front-page news. Word is spreading and the Times is losing credibility by the hour. Friends of mine who never before believed that newspapers suppressed news are shocked by the evidence before them.

“I didn’t think it was a significant or surprising story,” Baquet said to Sullivan in response to an email inquiring about his decision.

Baquet’s response seems strange given that the Times has partnered with the Guardian on NSA stories drawing from Snowden’s cache of classified documents (and considering how many pieces the paper has done on artisanal Brooklyn).

However, Baquet goes on to raise an interesting point: “I think the more energy we put into chasing the small ones, the less time we have to break our own. Not to mention cover the turmoil in Syria…We can spend all our time matching stories, and not actually covering the news.”

Whether or not you agree with Baquet—and Sullivan doesn’t—he is suggesting a perhaps inevitable fate for old media in the Internet age. In a time when so many people have access to so many different news sources, there appears to be less intrinsic value to trying to be the paper of record. Instead, Banquet appears to advocate that media companies—especially those with limited resources—should divide up the beats: the Times takes Syria; the Guardian takes the NSA.

Of course, that strategy is more difficult to pull off in an environment where papers—including the Times—have begun putting up online paywalls.