Can this app prevent pregnancy?

Natural Cycles claims to be 99.9 percent effective at preventing pregnancy, more so than condoms or the pill.

There’s one birth control method, however, that its proponents say has the fewest drawbacks of all: nothing. It’s the fertility awareness (FA) method, a method of contraception in which women track their ovulation to prevent pregnancy.

While there are many apps on the market that use the principles of the fertility awareness method to help facilitate conception, such as Fertility Friend or the Kindara ovulation calendar, there’s only one that purports to help prevent it: Natural Cycles, a Stockholm-based startup that claims to be 99.9 percent effective at preventing pregnancy.

With its #BeYourself hashtag campaign, Natural Cycles is marketing itself as a safe, effective, and all-natural alternative to hormonal methods of contraception like the birth control pill, which can yield potentially unpleasant side effects like nausea, spotting, weight gain, and mood swings.

“There are many women on the pill who are unhappy with it,” says Elina Berglund, the cofounder of Natural Cycles. “Before now, there was no serious alternative for people who didn’t want to have the pill or insert the IUD. Now there is a serious alternative, and that’s us.”

Natural Cycles works like this: You take your body temperature every morning with a thermometer that comes with the app, and input the data into the app. If your temperature is slightly higher than normal, you’re likely ovulating, so the app will instruct you to avoid intercourse (or to use contraception) on that day.

The app, which costs $59.90 for a year-long package, features a calendar that’s divided into “red” days, where you’re more likely to become pregnant during unprotected sex, and “green” days, where it’s OK not to use protection. Because you’re only at risk of getting pregnant six days per cycle, as sperm can only live in the female body between two to five days, you’ll only have a maximum of six “red” days if your cycle is regular.

According to Berglund, Natural Cycles operates on principles similar to those of other fertility-tracking apps that let you track your own temperature. The only difference is “they’re all focused on getting pregnant, because they cannot tell you when it’s absolutely safe to have unprotected intercourse that won’t lead to pregnancy,” Berglund told the Daily Dot via Skype. “We’re the only app that focuses on contraception.”

What differentiates Natural Cycles, however, is that it’s being marketed as a totally safe, effective, and effortless way to prevent contraception.

A former physicist, Berglund says she was inspired to create Natural Cycles in 2013, when she and her husband decided to try to have a baby. Because she’d been on the hormonal contraceptive Norplant for more than 10 years, she decided to eschew fertility drugs and go about getting pregnant the old-fashioned way: “I wanted to give my body a break. I didn’t want to go from one hormone to another,” she says.

To identify when she was ovulating, Berglund decided to buy “a German lady computer from the 90s,” which analyzes your body temperature to tell you when you’re ovulating. But she realized the algorithm was completely out of whack. So she asked her friends to take their temperatures and email them to her every morning, “and right away I’d write back and guess red or green.” As it turned out, she correctly predicted when they were ovulating 100 percent of the time.

There’s nothing that revolutionary about Natural Cycles and other apps that use your body temperature to predict when you’re most likely to get pregnant. The app simply relies on natural temperature fluctuations to predict your fertility, because when you ovulate, your body releases more progesterone, which in turn slightly increases your temperature.

What differentiates Natural Cycles, however, is that it’s being marketed as a totally safe, effective, and effortless way to prevent contraception. Emphasis on the “effortless”: While most fertility-tracking methods require a great deal of research and self-discipline, to hear Berglund tell it, all you need to do to avoid getting pregnant with Natural Cycles is punch your temperature into an app.

“Before with natural family planning, you had to read up on the science, apply it to your own body, and analyze your own data,” she says. “We take away most of that. We just tell them, red or green. That’s all they need to know.”

For this reason, Berglund recommends Natural Cycles for pretty much anyone in a stable and committed relationship, including teenagers, who might not be all that disciplined or prone to using contraception to begin with. She says that if you’re sexually monogamous, and don’t have a hormonal condition like PCOS which could screw up your cycle, Natural Cycles, or the “natural” method of contraception, will likely work for you.

That said, Natural Cycles, which now has 15,000 users in Europe and the United States, is not totally infallible. Berglund admits that there have been a few pregnancies as the result of people having sex during “red” days. 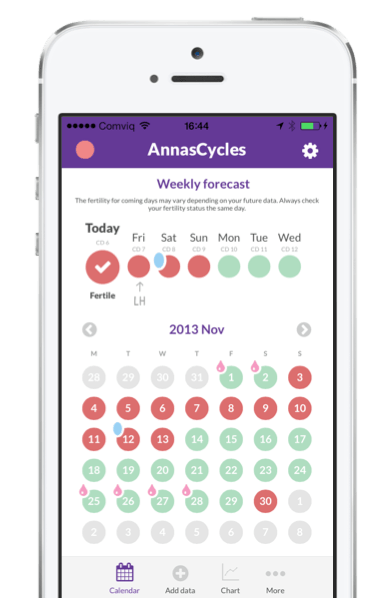 There’s also something more than a little bit creepy about how the app alerts users to a potential pregnancy. Because it can determine whether or not you’re pregnant from your temperature, the app will send you a notification telling you that you’re probably pregnant and should confirm with a pregnancy test, Berglund says. (Even more bizarrely, Berglund says the app has predicted miscarriages the same way.)

Further, not everyone in the medical community is totally convinced that fertility trackers like Natural Cycles, not to mention the fertility awareness method in general, are 100 percent effective. As the UK-based sexual health organization the Family Planning Association told the Daily Mail, while there are “numerous apps and online charting systems available, with varying approaches to monitoring changes through the menstrual cycle, their reliability and effectiveness in avoiding pregnancy is unknown.”

That said, Berglund and her husband are working on updating the app to make it more accessible and user-friendly. This year, they’d like to add wireless connectivity to the app’s thermometer, so it automatically inputs the user’s temperature. And with their #BeYourself campaign, they’d like to spread the message of natural contraception to the masses.

Update: A previous version of this article stated that there have been a few unwanted pregnancies as a result of users forgetting to take their temperatures. This is inaccurate, as users forgetting to take their temperatures will only result in fewer green days. There have been a few pregnancies as the result of women having unprotected sex on red days, when they are at risk of pregnancy.