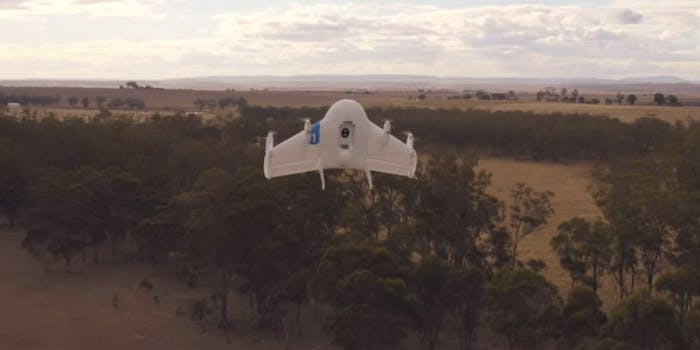 Google's Project Wing is technically illegal to experiment with, but it has NASA's blessing.

Google’s state-of-the-art drone research may only be possible due to a legal technicality.

Documents unearthed by the Guardian show that the tech giant has partnered with NASA to sidestep drone regulations that apply to other companies. The space agency holds a COA (Certificate of Waiver or Authorization) issued by the Federal Aviation Administration (FAA), extending the bearer’s unmanned aerial vehicle privileges beyond what is currently permissible under commercial drone law. Without that waiver—or a Special Airworthiness Certificate (Experimental Category), which is difficult to obtain—there’s very little that’s permissible right now.

COA waivers are only granted to public agencies. They’re commonly issued to the military or an area fire department. But Google has been “borrowing” NASA’s drone exemption for its own research and experimentation, flying its Project Wing delivery drones under NASA’s eye for more than a year.

Commercial companies wanting a drone exemption are supposed to apply for something called the “333.” Amazon was awarded one in April to legally test its delivery drones over company-owned property. Google applied for its own last week, though the FAA will have to get through a hefty backlog of 1,500 exemption applications ahead of it.

This news item is one in a series of indicators that drone regulators cannot keep pace with drone technology effectively. Amazon has been championing commercial drone use since late 2013 and had to leave the country in order to produce a demo video of what our drone-enabled future might look like. It would have been illegal to film such drone use in the United States, and it still remains a mystery where the video was made.

Google made its own demo video for Project Wing, filmed in the much drone-friendlier Australia, though its NASA-sanctioned research has been taking place in the U.S.

Brendan Schulman, vice president of policy and legal affairs for drone manufacturer DJI, addressed concerns over the state of American drone laws in a 2014 interview with 3D Robotics. (He was working as special counsel for law firm Kramer Levin at the time). If current drone laws were to stagnate, he said, we “would reduce the number of companies who can innovate; we’d lose a lot of opportunity to do good, and we’d increase the burden of getting involved.”

Until regulators can catch up with technologists, Google’s drones will have to navigate through loopholes—if they want to get off the ground.

H/T The Guardian | Screengrab via Google/YouTube