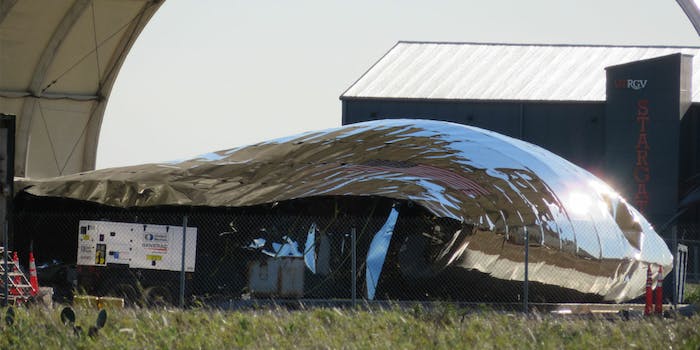 A prototype spacecraft from Elon Musk’s SpaceX has been damaged after being knocked over by strong winds.

The incident occurred at the company’s facility in Boca Chica, Texas, after the vessel, known as the Starship, toppled in the volatile weather.

Musk confirmed damage to the nosecone in a tweet Wednesday and estimated that it would take several weeks to repair.

I just heard. 50 mph winds broke the mooring blocks late last night & fairing was blown over. Will take a few weeks to repair.

The nosecone appeared crumpled and possibly torn in photos posted online, although Musk stated that the propellant tanks were unharmed.

Referred to as the “test hopper” by SpaceX, the prototype is designed to give the company pertinent data as it works toward building a full-scale version. The finalized Starship, which will stand at around 18-stories tall once completed, will hopefully one day transport humans and cargo to Mars.

According to Federal Communications Commission documents, the current prototype will fly no higher than 16,400 feet during test flights.

SpaceX had originally planned to build the hopper out of carbon-fiber composites but has since shifted to a stainless steel alloy. Musk told Popular Mechanics this week that the material would not crumple under pressure and could withstand extremely high temperatures.

Although Musk stated on Jan. 5 that he intended to test the hopper in “four weeks,” the SpaceX CEO speculated that it would probably take twice that long given the likelihood of “unforeseen issues.” It appears those unforeseen issues appeared in the form of Texas winds.