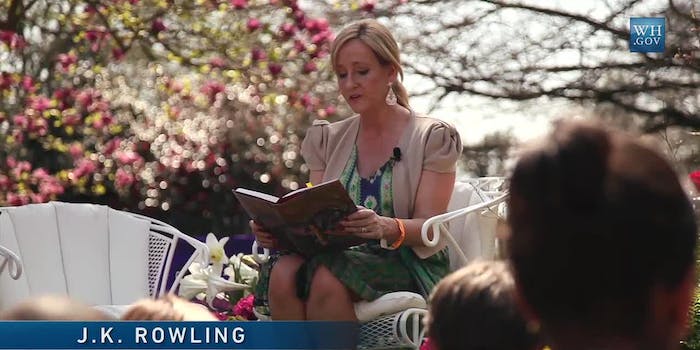 J.K. Rowling throws down with Scottish politician on Twitter

Unconcerned Harry Potter fans who haven’t paid attention to their queen’s involvement in Scottish national politics might have been confused earlier today when accusations that J.K. Rowling was aiding and abetting sexist trolls lit up Twitter.

In truth, today’s dustup, in which Scottish Member of Parliament Natalie McGarry accused Rowling of supporting a sexist troll may actually have roots in British politics and a fight for Scottish independence that refuses to dwindle.

McGarry represents a section of Glasgow in Scottish Parliament. Currently an Independent, she formerly served as a leader in the Scottish National Party, the political party focused on gaining independence for Scotland from the United Kingdom. Thursday afternoon, McGarry made an accusation on Twitter that startled many Scots:

Apparently, no one was more surprised than Rowling herself, who quickly shot back:

.@NatalieMcGarry I'd love an explanation of this accusation, Natalie. pic.twitter.com/Yh6VvLz285

The source of McGarry’s accusations is a Twitter user who goes by the pseudonym Brian Spanner. He appears to be stridently anti-Scottish independence and has a long history of saying mean things about Scottish politicians. For example, here he is taking snarky potshots at “Yes Scotland” advocate Pat Kane:

Spanner and McGarry have been sparring with one another online since at least 2014, when she grabbed a now-deleted screenshot of a conversation Spanner had been exchanging with another Twitter user in which he called her “genuine bombscare material”: Spanner’s comment about her “blood line” could be read as a kind of slur for sensitive Brits, but he clarified that he meant it as a barb against nepotism, nothing more. McGarry’s critics also pointed out that she had obviously photoshopped the screenshot by leaving out one of the replies.

Rowling seems to have “met” Spanner online in August, through this interaction involving an opinion column critiquing the Scottish Nationalist Party:

Since then, they’ve stayed friendly, bonding over their fellow political sentiments. Since this is the Internet, they even have fans of their friendship:

@jk_rowling @BrianSpanner1 I made you a new profile pic, Jo. It matches Brian's previous one. :) pic.twitter.com/xUO45pfDqU

In the meantime, Spanner has continued provoking McGarry by doing things like tweeting her erotically posed vegetables:

Today, McGarry had apparently had enough.

.@NatalieMcGarry OK, Natalie. Guess we'll have to take this offline.

But after McGarry confronted Rowling, the author’s many fans hastened to point out that implicating her in Spanner’s activities was going too far.

Thank you very much, Natalie, and I'd like to ask anyone following me who is being less than polite to you to stop. https://t.co/U1XSkmbNoI

Yet just after apologizing, McGarry stuck to her guns:

She also presented a photoshopped version of the tweets she was accusing Rowling of encouraging. In the photoshopped version, Rowling appears to be egging on one of Spanner’s more vile tweets. However, since all the tweets are still readily available, Rowling and pretty much everyone paying attention to the fight saw and pointed out the discrepancy:

.@NatalieMcGarry Which one is it? Are you presenting a cut and pasted screenshot as false evidence of your original accusation?

The main thread of concern for McGarry seems to be that Rowling is friendly with a man who is frequently aggressive on Twitter. Though the Daily Dot could not find overt signs of misogyny on Spanner’s Twitter account, it is heavily populated by deformed vegetables that take the shape of genitalia.  It’s probably true that seeing a beloved author befriend someone who tweets dick pics—even if they are just vegetables—probably isn’t exactly a fun time.

Still, Rowling hasn’t been egging Spanner on in his more infamous tweeting activities. And Rowling’s fanbase was squarely in her corner, with numerous fans reporting McGarry had blocked them after they tweeted their support of the Harry Potter author.

As for Spanner, whether or not he’s an actual troll, he’s definitely aware of the nuances of online conversation, if this joking reference to Gamergate is any indication:

And as for the Internet, well, it had its priorities in order:

Update 4:19pm CT: The Twitter fight is showing now signs of slowing down, with Rowling now hinting at a lawsuit.

This has stunning implications for politicians everywhere. https://t.co/0FXcH4oDgb

.@NatalieMcGarry You don't appear to understand how Twitter or defamation works. I'm going to help you out with the latter.