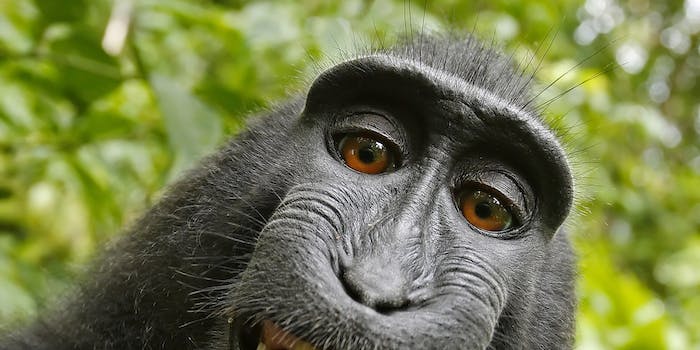 The saga of the monkey selfie is apparently far from over. Seeking to have the photo’s copyright transferred to the primate himself, PETA is now filing for an appeal to the Ninth Circuit on March 20.

Last year, People for the Ethical Treatment of Animals brought the lawsuit on behalf of Naruto, the crested Sulawesi macaque in the photo, who snapped the pic after picking up photographer David Slater’s camera in 2011. PETA sued Slater for publishing the photo in a book of his, arguing that Naruto holds the copyright of the photo since he was the one to actually take the picture. A judge dismissed the lawsuit in January.

This is just the latest in the legal battle over the photo. Slater initially claimed copyright, but the Wikimedia Foundation put it up on Wikimedia commons, claiming the photo is not copyrightable since it was not actually taken by a person. Slater ultimately failed to get the photo removed, and the U.S. Copyright Office explicitly stated in 2014 that a “a photo taken by a monkey” is a work created by natural elements, and therefore cannot be copyrighted.

Though it seems unlikely that PETA will win this case, it would be a major feather in the cap of activist groups attempting to legally establish personhood for several intelligent animals. Recently, a group called The Nonhuman Rights Project filed a suit to free a 26-year-old chimpanzee named Tommy to live out his days in a sanctuary. The group described Tommy to be “a cognitively complex autonomous legal person with the fundamental legal right not to be imprisoned,” according to the New York Post.

An appeals court will decide if they will uphold the court ruling in Naruto’s case in about a month.