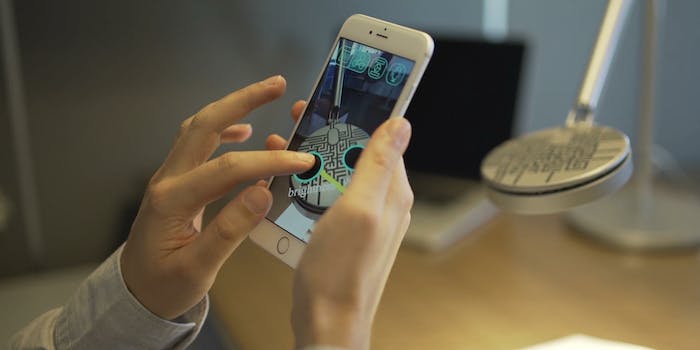 You can program anything.

The future promised by the Internet of Things still feels like it’s a long way away. But when (and if) it arrives, the Swiss army knife for fiddling with devices and connections may come courtesy of MIT.

Valentin Heun, a PhD student at the Massachusetts Institute of Technology’s Fluid Interfaces Lab, has released the Reality Editor, a smartphone app that lets users pair just about any object to another. The augmented reality app shows the unseen wires of the digital world and makes it easy to draw new connections that create new functionality.

For example, you can point the camera of your smartphone at a knob, and the app will display its functionality. Then you can drag and drop that functionality to an object like a light. Once the connection is created, you can turn the knob and the light will turn on or off. You’ve created an impromptu light switch.

“The Reality Editor is like a digital multitool,” Heun told the Daily Dot. “It allows you to learn easier about how an object works.”

With a slick interface that reveals the hidden world of connectivity that lies beneath reality, it’d be easy to chalk the Reality Editor up to some techno-magic. But behind the veil of the app’s presentation is an impressive bit of engineering.

“We found a novel method that allows you to build simple HTML web pages and augment them on to an object. This means that every visual representation that you see in the user interface is actually a webpage and can be designed by every web designer,” Heun explained, calling the Reality Editor a “web browser for the physical space.”

This approach is vastly different than the one taken by the Internet of Things, which uses a cloud-based system. “Imagine an IoT heating system in a cold winter night and because of a blizzard the Internet stops working and therefore your heating system [stops],” Heun said. “I live in Boston, I know what I am talking about here.”

What he described isn’t a theoretical flaw in the IoT; it has already happened. In Germany, an issue at the data center for the smart home system Qivicon from Deutsche Telekom left people without access to their devices for several hours, and other connectivity problems persisted for long after that.

“With the present IoT we are building a system with maximum error possibilities. Strong systems need to be decentralized and redundant,” Heun said, which is exactly why he built the Reality Editor and Open Hybrid, the open source platform driving the app.

The Reality Editor also addresses another issue that has plagued the IoT: fragmentation in the market. Devices are supposed to communicate with one another to simplify the user experience, but there are hundreds of manufactures making connected devices that can’t communicate with ones from other makers. Heun explained that one of the reasons for the fracturing is because IoT is driven by the “web 2.0 business model.”

“This means that you generate a proprietary data silo with a trusted/dependent user base and then you either sell their data and/or you show them advertisement,” Heun said, which he believes is contrary to the original idea for openness of the Internet. “As long as we follow the web 2.0 business model we will not be able to unleash the real potential of IoT.”

Cost is another important factor for the IoT—each device that you want to add to your home carries a steeper price tag than a “dumb” version of the product. When all those devices have to come from the same manufacturer to ensure they all work together properly, you best hope that company doesn’t stop supporting those products or go out of business.

With Heun’s Open Hybrid platform and the Reality Editor app, the limitations are lifted. “It is not representing a pyramid model where only one silo can be the winner. It’s a model where everyone can be involved to build the products they want,” Heun explained. “We have designed the tools for Open Hybrid in such a way that product and web designers should be able to build new products with them.”

The open platform makes it easier to bring devices online, requiring just a simple software adapter to bring any existing connected device into the Open Hybrid ecosystem. QR code-style stickers called FingerPrints make it easy for the Reality Editor to identify new items to add to its network, but in the future built-in object recognition could make that system unnecessary.

The Reality Editor and the accompanying Open Hybrid platform aren’t a system concocted as a quick fix for the IoT—Heun has been working on related technology for over three years now. Before joining the MIT Media Lab, he ran a startup for three dimensional space interfaces called 6D.

“I became fascinated how much stronger of a tool the computer can become, when we see it as a tool that leverages all human strength. The Reality Editor is so to say a continuation of that line of work,” he said.

For the Internet of Things and other systems to work, Heun believes that, “eventually the strongest computer interface has to be the reality itself.” With Reality Editor and Open Hybrid, he’s just providing the tools to help make our reality a connected one.