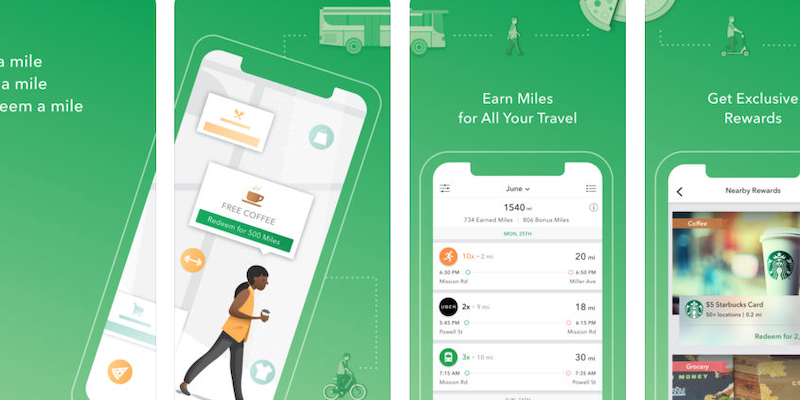 The Miles app constantly tracks your movement in exchange for discounts

How far are you willing to go to ensure you get the best deals from your favorite brands? The Miles app, a modern take on the airline miles-aggregating credit card, might push your limits. Instead of racking up miles based on purchases, it racks up points based on the miles you travel each day.

Miles (free on iOS) calls itself a “universal rewards platform.” The app tracks your movements each day and rewards you for adopting green modes of transportation. One mile in a car earns you exactly one reward mile, but a mile in an Uber, Lyft, or carpool is worth double. If you use public transit, you earn three reward miles per actual mile traveled. Hop on a bike and you get five points per mile, and if you hoof it, you get ten points per mile. Interestingly, one mile of flying will earn you only 0.1 reward miles.

Like your typical rewards card, once you accrue enough reward miles, you can exchange them for deals from favorite brands. This could include a gift card for Starbucks, Target, or Amazon, for example. The app has partnered with a variety of companies on its rewards: Whole Foods, Hello Fresh, Cole Haan, and Bath & Body Works are among some of the other options app users can use their miles toward. The app will also sometimes run challenges where you can get a specific reward that might normally cost a certain number of miles in exchange for commuting by bus one day or riding your bike three times in one week.

For the app to work—and for users to reap the greatest miles for gift cards and discount codes—it has to constantly track your location. That is a sizable issue when it comes to personal privacy and security. While the app won’t share your raw movement data with its partners, it will share aggregated, abstracted insights, according to the Verge.

Those insights are clearly very valuable, based on the big names who’ve partnered with the app. The app has also had two years of beta testing, so the product is quite polished. In addition to sections that show nearby rewards you could cash in on, the app has a Venmo-like feed of you and your friends’ miles earning stats and redemptions.

The Miles app is currently iOS only but should be arriving on Android in the future.