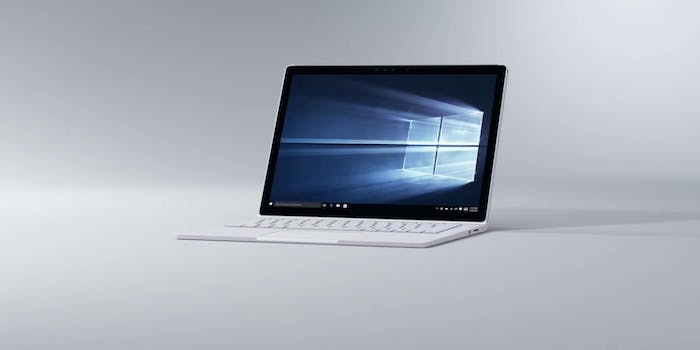 Microsoft is launching a hybrid notebook with Apple-like pricing.

At Microsoft’s Windows 10 Devices event today in New York, the company went all-in against the rising tide of Apple’s MacBook.

The Surface Book has a 13.5 inch display housed in a magnesium shell and powered by 6th generation Intel Core processors, along with NVIDIA discrete graphics for a $400 premium. Panay claimed that it also lasts 12 hours on a single charge and is twice as fast as a Macbook Pro. A very lofty claim. To prove it, Panay played Gears of War on stage, saved a video file, and edited it on Adobe Premier.

But it wouldn’t be a Surface product if the screen didn’t detach. Well luckily it can. Using a “dynamic fulcrum” hinge, the Surface Book can be propped up like a normal laptop, flipped like a Lenovo Yoga, or the screen can be removed altogether.

The real genius of this design is that the entire housing of the laptop is being used for processing. The screen houses a processor so that it can work while detached and the body houses the GPU for higher end computing tasks.

Pre-orders begin on October 7th and the Surface Book will launch on October 26th starting at $1,499.