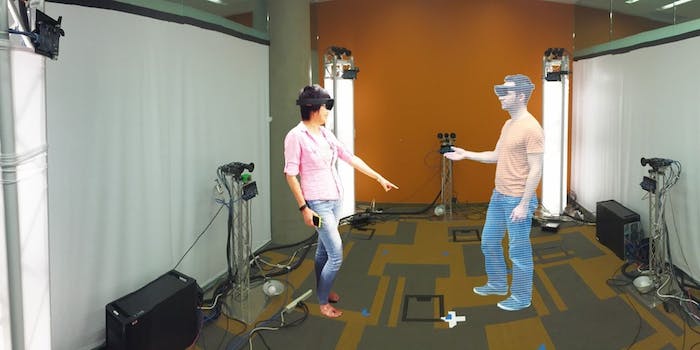 It's like someone's standing right in front of you.

The Oculus Rift might have just launched for consumers, but Microsoft is working on virtually transporting people into remote situations through augmented reality.

Called Holoportation, it can capture an image of an individual and the surrounding space, and transmit it to someone anywhere in the world, as long as they’re using a HoloLens device, Microsoft’s AR headset.

In a new video, Microsoft partner research manager Shahram Izadi demonstrated Holoportation’s capabilities in controlled areas. In one scenario, his daughter played with toys and jumped off a chair, and in the other room, her father interacted with her remotely.

3D cameras capture the image of a person and objects, and then texture is added to the images. Then, Holoportation compresses the data and sends it to the person wearing HoloLens. The projected image fills up their space, as if someone was right next to them.

Holoportation is designed to let people interact with individuals in real-time, but it can also record situations and play them back. Izadi was also able to shrink down the replay of time spent with his daughter to fit on a coffee table.

The demonstration is impressive, but also a bit eerie.

“If I wear my HoloLens device, it’s like walking into a living memory,” Izadi said. How’s that for a plot of a sci-fi horror movie?

Holoportation is by no means a consumer experience yet, especially considering the HoloLens hardware costs $3,000. Developers can apply for a development model, which begins shipping March 30.