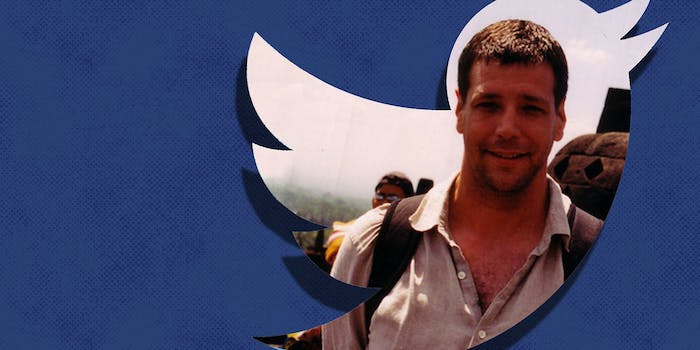 It's the first official statement by the journalist.

After being held prisoner for almost three years in Somalia, the American-German journalist Michael Scott Moore has signalled his return to civilization with a tweet.

is out of Somalia.

Moore, a freelance contributor to German newspaper Der Spiegel, had been taken prisoner by an armed militia in 2012 while carrying out research for a book on piracy. Occasional photos and videos of the journalist emerged over his time in captivity, before his release was announced a week ago.

Footage of Moore while in captivity.

Though the BBC reported then that Moore was “overjoyed at his release,” his tweets constitute the first direct statement from the journalist.

but still without full access to email and so forth. Patience, folks, and thanks for the astonishing support. #humbled

Scott had not been a prolific Twitter user, though his previous tweet on the social networking service was in January of 2012, soon before his capture:

When news of his release broke, Spiegel’s editor Wolfgang Buchner issued a statement saying that “we never gave up hope and are now rejoicing with Michael and his family that this nightmare has finally come to an end.”

The Daily Mail reports that a ransom was paid for Moore’s safe release.