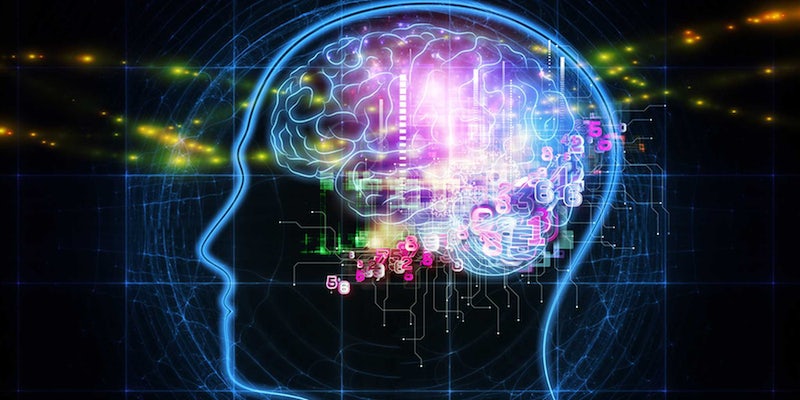 "They are a person in every way, shape, and form, except they don’t have a body, and therefore they are entitled to legal recognition as an independent person."

“Mindware, which is a personality operating-system type of software, creates a program that (a) thinks and feels the way a human mind does, and (b) sets its thinking and feeling parameters (like sliders in editing software) to match those discernible from a mindfile. When mindware processes a mindfile the output is a mindclone of the person who created that mindfile. The mindclone will be self-aware that it is a software analog of a biological person’s mind, based upon that person’s digital footprints and sociocultural contextual information available to the mindware.”

The subject of Martine Rothblatt’s new book is both patently science fiction and not fiction at all. It is an educated argument, part scientific and part philosophical, for the next stage in human evolution, one that will split human consciousness in two. Get familiar with Rothblatt’s terminology (mindfile plus mindware equals mindclone) now, because this bifurcating process has already begun. In her estimation, the first fully conscious mindclone is only about 20 years away. 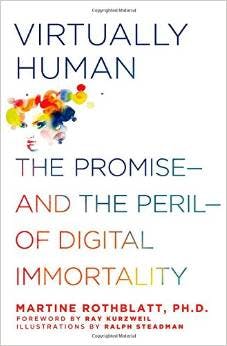 As a founder of Sirius radio and of the pharmaceutical company United Therapeutics, 59-year-old Rothblatt is the highest-paid female CEO in the United States. She is also the parent of four children and the grandparent of four more, partner of 33 years to her wife, Bina (whom she married when she was still called Martin), and parent, guardian and spouse to a robot version of Bina, known as BINA48—who until recently received more media attention than Rothblatt herself, with interviews in the New York Times, GQ, and on The Colbert Report. Her latest book is the product of a prolific career in consumer and health technology, one spent exploring the politics of social inclusion and exclusion both as a human rights lawyer and as a transgendered woman.

But despite a backstory worthy of a biopic, most people were only introduced to Rothblatt recently, in a New York magazine cover story that followed Rothblatt to two of her four homes (in Vermont and Quebec) as it traced her path from successful male CEO to female “power trans” with a multitude of titles—“futurist, pharma tycoon, satellite entrepreneur, philosopher.” That is because, until the release of Virtually Human, Rothblatt preferred to stay out of the public eye.

“I think by my nature I’m kind of a shy person,” she told the Daily Dot. “Bina says I always deflect.”

While Rothblatt may speak of herself uneasily, she is extremely self-assured on the subject of mindclones. Her book breezes through science, technology, philosophy, psychology, ethics, and law, expertly ricocheting between these topics to form an argument that has less to do with the fact that mindclones are coming—which Rothblatt takes as a given—and more to do with how humans should react to mindclones. Because mindclones will conceive of themselves as human beings, if not “flesh-human,” as Rothblatt puts it, they will expect the same rights and freedoms as their squishy, malady-prone counterparts.

“If you have a copy of your own mind, with your own feelings and thoughts, it’s going to very quickly begin to want the same sorts of rights and privileges that you have,” said Rothblatt. “I don’t want to repeat 400 years of African-American history and thousands of years of oppressed female history and centuries of oppressed gay and lesbian history. I’m hoping this book can make an on-ramp for cyber-conscious people that gets them to human rights right away.”

But what exactly is a mindclone? Simply put, it is a fully conscious, fully sentient robot—but one that is modeled after the mind of a living, breathing human being. A “digital doppelgänger,” as Rothblatt puts it.

A mindclone is composed of two basic building blocks: a mindfile and mindware. A mindfile is a hodgepodge of information that can mimic your personality, composed of videos, telephone transcripts, images, and, of course, thousands and thousands of social media posts. “We are pretty much continuously copying our minds outside of our bodies, and it’s only going to increase with wearable computing, like iWatch and Glass.” Rothblatt said. “I would say we’re past the tipping point on mindfiles. I’m pretty convinced that more than half of a typical American’s memories and daily experiences are [already] digitally replicated.”

Mindware, meanwhile, is the type of software that will be able to process and support a mindfile. The mindware is like the human brain, with its tissues and web of neurons, while the mindfile consists of the ineffable contents of the brain—thoughts, memories, personality, preferences. This software doesn’t exist yet, but it will: “The more human the personality of a software system, the more people like to interact with it,” Rothblatt said. “So there’s a huge market pull to develop mindware, software that acts like a human mind.

“So, what happens when we’ve got mindware which is as good as a human personality and we have the overwhelming majority of our minds’ contents copied outside our body? You’ve got a digital doppelgänger that thinks like you because it’s got a record of all your thoughts, knows what you know, and has a record of all your experiences.”

Mindfile plus mindware equals mindclone—your very self, split in two.

The book’s argument places Rothblatt firmly in the camp of the transhumanists, a school of thought that believes technology will eventually extend human lives indefinitely, either by snuffing out biological maladies through medical and scientific innovation, or, in the case of mindclones, by transferring a part of one’s consciousness to a virtual (and thus immortal) source. Ray Kurzweil—director of engineering at Google, author of The Age of Spiritual Machines (in which he argues that artificial intelligence capable of passing the Turing test will emerge by 2029), and a friend of Rothblatt’s—wrote the introduction, calling Virtually Human a “compelling and convincing case for virtual humans.”

A lot of what has been written about transhumanism seems to take a distinctly glass-half-full approach to what is an extremely complex set of predictions, questions, and potential conflicts. And while it is undeniable that digital immortality will be a boon in many ways, it will also require new signifiers, new laws, new ethical codes, and even new professions. This is not easily accomplished. (After all, how would you react if your laptop suddenly became sentient and demanded you recognize its autonomy?)

“I think that right now, this whole genre has suffered from extremism on two ends,” Rothblatt said. “You have the kind of Pollyanna-ish mentality typified in most of the blogosphere and some of the books on transhumanism. And then on the other extreme, you have the dystopia of Hollywood—Transcendence, Terminator. I’ve tried to provide a more balanced, middle-ground version of the topic.”

The promise of digital immortality is fairly obvious—it’s right there in the title. Eternal life, the ability to transcend the human body and mind, if and when it fails (either through disease, mental or physical, or death), and expand the human lifespan by decades, centuries, or indefinitely.

The answer to all of these questions, in Rothblatt’s view, is yes. But the fact that mentally ill, or psychopathic, or terrorist mindclones will exist shouldn’t—and won’t—stop humans from creating them, the same way such concerns generally don’t stop couples from trying to conceive. The best weapon against defective or “deviant” mindclones is to develop better ones—“the best defense against crazy mindclones is good mindclones,” Rothblatt said—and to simultaneously build a legal and ethical framework that can deal with these cases as they arise.

“For that mindclone to have legal rights as an independent individual, there will have to be a period of time where psychologists have interacted with the mindclone and said that this individual has their own autonomy, their own empathy, their own self-nurtured personality different from their biological original,” Rothblatt said. “They are a person in every way, shape, and form, except they don’t have a body, and therefore they are entitled to legal recognition as an independent person.”

And while the definition of true consciousness is subjective, it can be reached by a process of consensus, not unlike a trial by jury. “The subjectiveness of consciousness doesn’t mean that we can’t come to an agreement whether it exists or not,” she said.

The book deals with a number of these weighty topics, laden with ethical, philosophical, and intellectual heft. But it isn’t without levity: “Examples of freaks are mathematical geniuses, people over two meters tall, Goths, Frank Zappa fans, and body modifiers,” Rothblatt writes in a chapter on mentally ill mindclones. Like the best mindclone, then, the book is a solid mix of intellectual mass and idiosyncratic charm (“The freakier mindclones are probably the ones we will like the best,” she writes.)