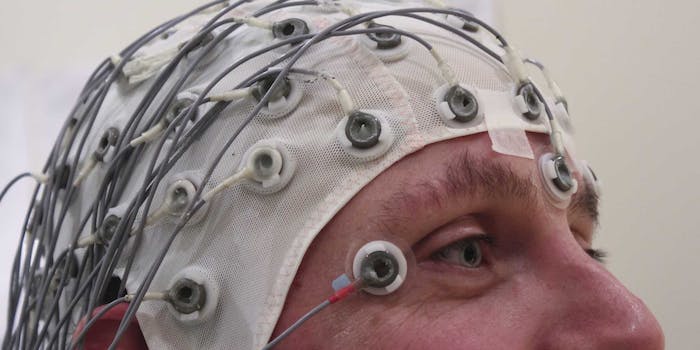 This proof-of-concept study is a sign of things to come.

Researchers at the University of California, Irvine have used brain–computer interface (BCI) technology to help a paraplegic man walk again. The proof-of-concept study may lead to newer, better tech for certain sufferers of spinal cord injuries.

Using a cap of electrodes over the brain, the researchers dialed in on the patient’s brainwaves as he imagined walking. In a grueling training program, the 26-year-old patient first learned to train his brain to make a virtual avatar walk. Then his brainwaves were wired via computer system to electrodes on his legs that stimulated the muscles to contract, allowing him to move his legs properly using his thoughts. He first learned to do this suspended above the ground, so he could perfect the motion without having to worry about his bodyweight. Then he learned to do it on the ground with aids to help keep him from falling over.

The research team published their results open-access in the Journal of Neuroengineering and Rehabilitation.

“This noninvasive system for leg muscle stimulation is a promising method and is an advance of our current brain-controlled systems that use virtual reality or a robotic exoskeleton,” Zoran Nenadic, one of the researchers who developed the system, said in a press release.

The next step will be to test the system in more than one patient. If all goes well, it may justify new research into invasive systems that can be implanted directly into the patient’s brain via surgery.

In other words, we’re getting closer and closer to a world where cyborgs are real, and where people with disabilities have more mobility options.

Photo via Chris Hope/Wikimedia (CC BY 2.0)