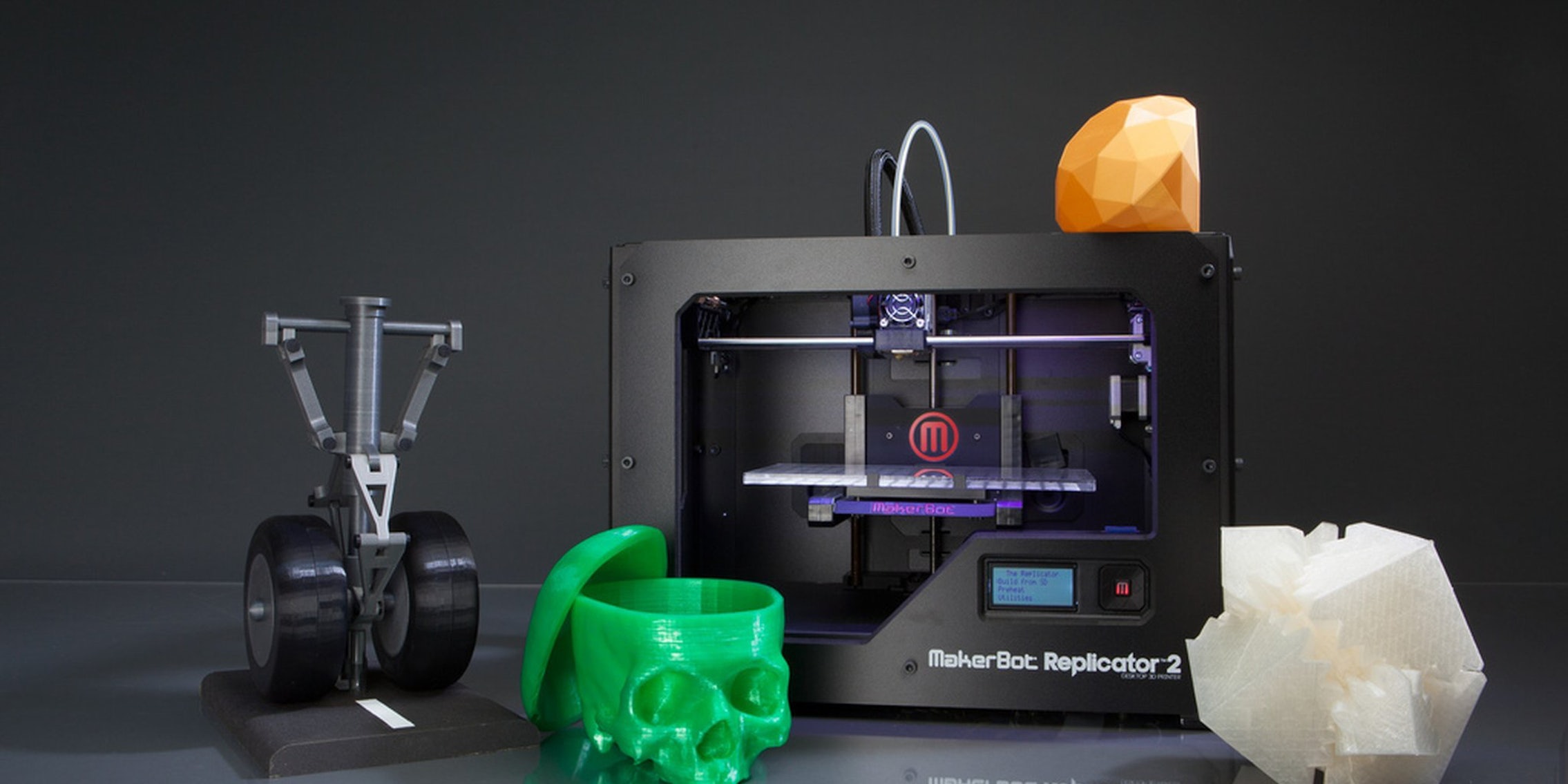 Inside the Feinstein Institute for Medical Research's bold frontier.

In healthcare, 3D-printing technologies are already used to give people prosthetic hands, replicate tumors to save loved ones’ sight, and create model organs to practice life-saving operations.

Now, scientists and physicians at The Feinstein Institute for Medical Research, have discovered a way to use MakerBot’s 3D-printing technologies to create cartilage and repair tissue damage in the trachea.

Damage to the trachea, the part of the body also known as the windpipe, can be caused by a variety of things including cancer, blunt trauma, or other injuries. Damage can be repaired in two separate ways, both of which have restrictions. Doctors either take out the damaged segment and repair the two ends together, or take pieces of cartilage from other parts of the body to repair the damage.

Scientists wondered if 3D-printing could provide another solution.

Researchers found that it’s possible to use the MakerBot Replicator 2X Experimental 3D Printer to print what’s called “scaffolding,” made up of PLA, a bioplastic commonly used in surgical implant devices. The team customized the printer so that living cells could be printed onto the scaffolding. The 3D-printed mixture of healthy cells found in cartilage, and collagen, eventually grew into the shape of a trachea that could be implanted into a patient.

“We were able to modify the exterior heads to accept a syringe with the bio-ink and cells we’re using,” Todd Goldstein, an investigator at the Feinstein Institute, told the Daily Dot. “The computer controls it as if it’s extruding plastics, but it’s extruding cells.”

The cells survived the 3D-printing process, and continued to multiply and grow, just like cartilage in the body.

Goldstein worked with a team of surgeons at the North Shore-LIJ Health System in New York to create the trachea. Their findings were reported on Tuesday at the 51st Annual Meeting of The Society of Thoracic Surgeons. Combined, the team—including Drs. Dan Grande, PhD; Lee Smith, MD; and David Zeltsman, MD—has decades of experience, but it took one year to successfully 3D-print the windpipe.

In order to create the trachea, researchers used what’s called “tissue engineering.” This science is similar to computer programming, but instead of code, cells from your body, including muscle tissue and cartilage, are used to build things.

A section of a trachea—a hollow, two-inch cylindrical shape—can be printed in less than two hours. However, the entire process takes much longer. Like other medical grafts, doctors need to take cells from cartilage on the patient, like an ear biopsy, then grow the cells so there are enough to print. Depending on how large the graft is, and the optimal incubation time, it could be a months-long process.

3D-printed materials are already used in hospitals for surgical practice simulating bone or other body parts, and last year, neurosurgeons successfully implanted the world’s first 3D-printed skull. Other companies are researching 3D-printed tissue and skin grafts, but the Feinstein Institute’s 3D-printed trachea is among the first tissue that could eventually be placed inside a patient in a clinical setting.

But people won’t be able to have tracheas repaired with this type of tissue anytime soon.

“We really want to take this into the clinic, however we’re not willing to do that until we test out everything,” Goldstein said. “Just because it works in a lab, doesn’t mean it works on a person. We’re really testing the safety and working on the functionality to make sure everything is squared away before we even do that.” 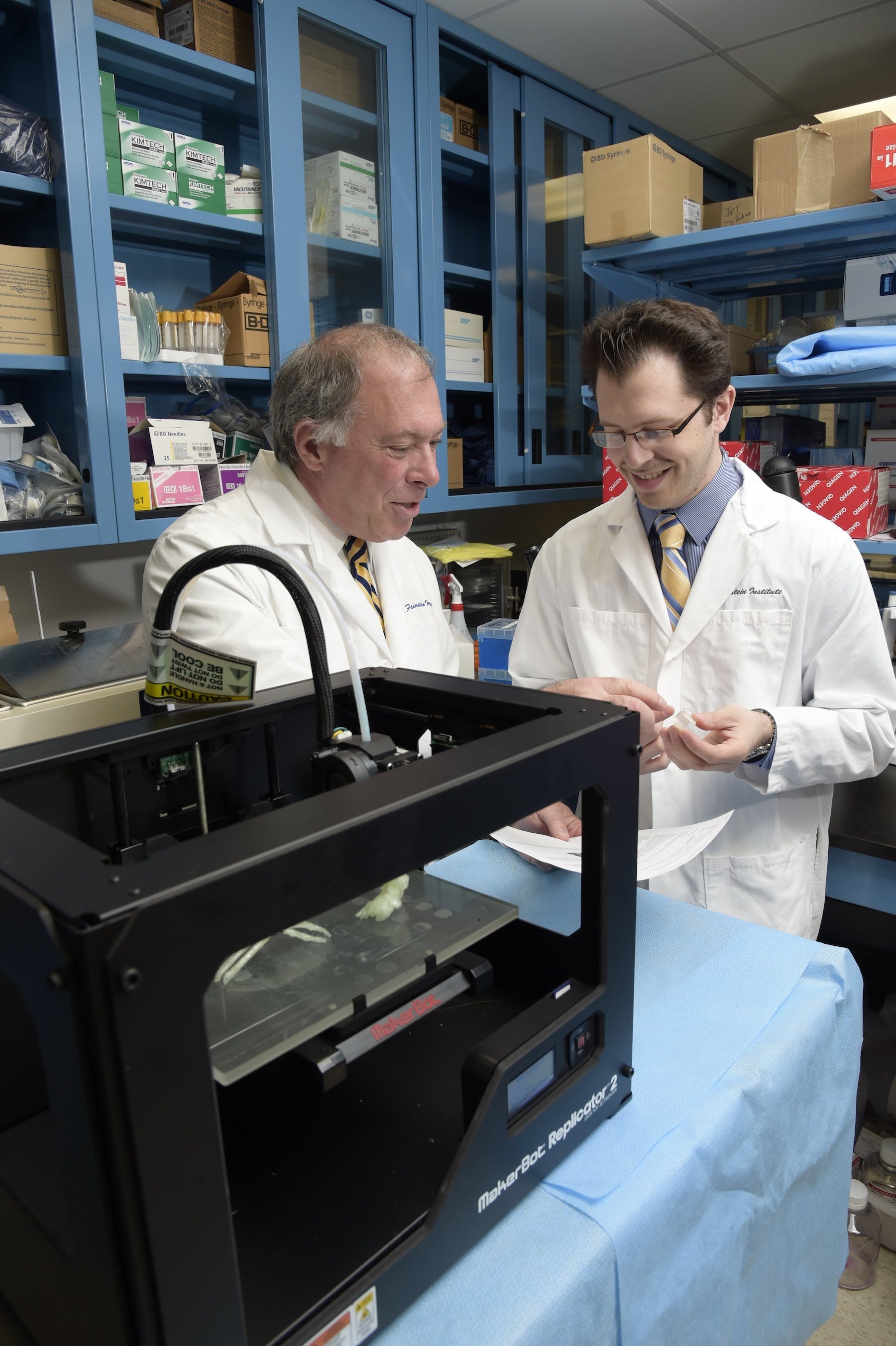 The Feinstein Institute for Medical Research

The trachea itself wasn’t the only thing the research team used the MakerBot for.

A bioreactor, a machine that warms the cells while they’re growing, can cost up to $150,000—instead of paying for a new machine, Goldstein created an incubator by printing plastic parts and gears to create his own.

“Having a 3D printer to rapidly prototype is so helpful,” he said.

The trachea is just the beginning of how 3D-printed tissue could potentially impact healthcare. Goldstein said other cartilage body parts, including ears, nose, and cartilage joints, could theoretically be 3D-printed and implanted.

Some experiments have already been done with 3D-printing ears. One art exhibit used DNA from Vincent Van Gogh’s relative to bioprint a replica of the famous artist’s ear.

Other body parts, like muscles, bones, and tissue, would be significantly harder to print.

“The stuff we learn from this can be used in other areas, however, the biggest problem is blood supply,” Goldstein said. “Fortunately with the trachea it’s nice because native cartilage cells that make up the tracheal rings are not very demanding for blood supply like a muscle would be.”

Though the team is dedicated to the trachea project, the Orthopedic Research Laboratory at the Feinstein Institute will also be working on other medical issues related to orthopedics, meaning parts of the body that have bone or cartilage.

“We’re working on different types of cartilage areas that could be done,” Goldstein said. “Because it’s cartilage, it’s not just limited to the trachea, but that’s what we started with because thoracic surgeons came to us and said, ‘This is a problem.’”

Photo by Creative Tools/Flickr (CC BY 2.0)