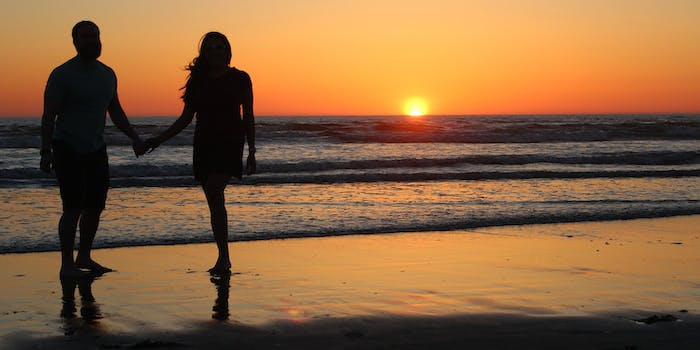 Are Facebook ads the next frontier of online dating?

Because nothing is more romantic than a targeted Facebook ad.

Because there aren’t enough ways to virtually find the love of your life, one company is rolling out a new way to date online using a social network that already exists.

Lovebook uses targeted Facebook advertising to find you a match.

The company doesn’t use your already-established Facebook profile that has years of personal data attached to it. Rather, Lovebook creates an entirely new Facebook page, complete with three hand-picked photos and interests, along with a note at the top of your page alerting visitors to the fact that it’s exclusively a dating profile.

CJ James, founder of Lovebook, said the idea came to him when his friend Marco had trouble with dating applications like Tinder and Match.com. So his friends used a new Facebook page and targeted ad campaign to try and help him find a date.

“We got around 100 people coming to his page,” James said. “The message was an introduction to Marco. And all the people who liked the post itself, we were able to message them and make a date.”

While many people would likely be completely put off by having some stranger’s ad for love appear next to their timeline, at least for one person, it worked. James said Marco found Sarah, and the pair have been dating for three months since she saw the Facebook ad.

Lovebook says its product is better than Match or Plenty of Fish—two popular dating sites—because the pool of potential matches is so large. However, it’s completely misleading to include the entirety of Facebook, or 1.2 billion accounts, as a potential audience. 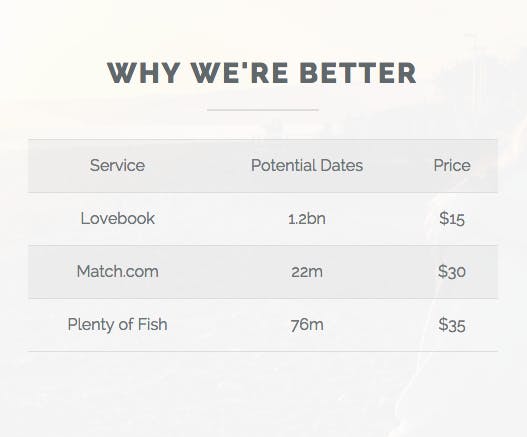 On dating sites, you know the only people who would see your profile or message are those exclusively looking to find a partner. Even with “targeted” Facebook advertisements, it’s impossible to reach only people who may find themselves on a similar quest for love. Facebook details like the “relationship status” or “birthday” can be fudged to avoid giving your identifiable information to both friends or the company itself. And who is still interested in all the same things they Liked when they initially set up an account years ago?

At least a couple people on Product Hunt, the site for trending products where the link to Lovebook was posted, find it a bit creepy. The comments say what we’re all thinking: “If I pay for ads am I going to get 100 people to Facebook stalk and try to find a natural way to ask on a date?”

Lovebook doesn’t provide much information on its homepage besides a signup that takes you to a PayPal purchasing form. But it claims that each ad is sent to potential matches based on location, interests, gender, and age range.

Nowhere in the sign-up form or follow-up email does it ask for your sexual orientation. Lovebook assumed I am straight.

To find out what it’s like to use Facebook as a vehicle for relationship-spotting, I forked over the $15 that supposedly gives you five “leads.”

I spoke with James soon after I paid via PayPal, both to find out more information about his product, but also because he is the one that receives your information and creates your ad.

As soon as I got off the phone with the U.K.-based founder, he created a new account for me, and then asked for additional interests and three photos. In an email, he wrote:

Now comes the hard part, choosing a few pictures! Lets start with three, do you have any preferences? (I suggest a profile shot, activity shot and an upbeat shot)

We also suggest people give six interests. Do you have any others to add to the three you already have?

The frustrating part with the whole sign-up process, beyond the fact you’re becoming a Facebook ad, is that you pay for your Facebook dating page and don’t receive an immediate response. On many other dating sites, there’s a trial period where you don’t have to pay for anything but can set up your account right away to see potential matches.

Not so with Lovebook. You send money and then wait until someone (likely James) emails you about setting up your page.

The whole process took about two hours, and James did the work for me. My ad campaign hasn’t produced any leads yet, but you can check it out here.

Despite the whole process being more convoluted than other dating websites, it doesn’t feel much different. No matter what site you use, you’re advertising yourself for a match. This one just has less information, and accurately packages itself as what it is.