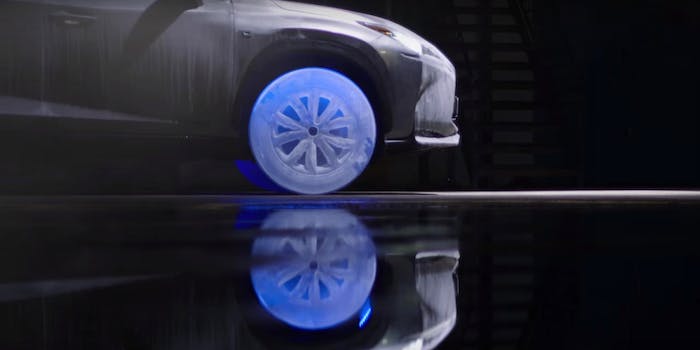 This Lexus has solid ice for wheels

We’re in the depths of December and much of the country that would usually be covered in snow still has green grass on the ground. If you’re feeling nostalgic for the icy roads of winter, Lexus has you covered: it equipped ones of its vehicles with wheels made of ice.

The project was three months in the making, during which a team of ice sculptors from Hamilton Ice Sculptors researched, designed, and tested wheels made of frozen water. The result is perfectly replicated wheels that fit comfortably on the axels of the Lexus NX crossover vehicle.

Despite how fragile one imagines ice to be, the ones on Lexus NX aren’t just for looks: they’re strong enough to support the weight of the nearly 4,000 pound vehicle.

The wheels do require a considerable amount of preparation before hitting the road; Lexus had the car deep-frozen along with the wheels, storing it for five days at -22 degrees Fahrenheit (-30° Celsius). After rolling it out of the cryogenic chamber for cars, the NX was taken for a spin down a London road (after starting on the first try, according to Lexus). Eat your heart out, Ice Road Truckers, every road is an ice road for this car.

The Lexus On Ice—which is probably also the name of a scrapped musical idea crafted by the company’s marketing team—stunt is just the latest in a series of experiments conducted by Lexus that doesn’t really say anything about the actual products.

Earlier this year, the car manufacturer crafted a working, electric-powered origami version of the Lexus IS out of cardboard. The company also showed off its RC F coupe with a glowing paint job that pulsed in sync with the heartbeat of the driver. Perhaps most noteworthy, Lexus rolled out a magnetic, liquid nitrogen-powered hoverboard that caught the attention of the entire Internet.

Have the only vaguely-automobile related projects paid off for the company? It sure seems so; the Lexus NX was the ninth-most searched car of 2015 and the most-searched for luxury vehicle according to Google. Sales have also been on the rise for the company since the start of the year.

So if you’re a car manufacturer, there’s a lesson here: quit worrying about your actual car and just start making cool YouTube videos. It’ll work out great for you.