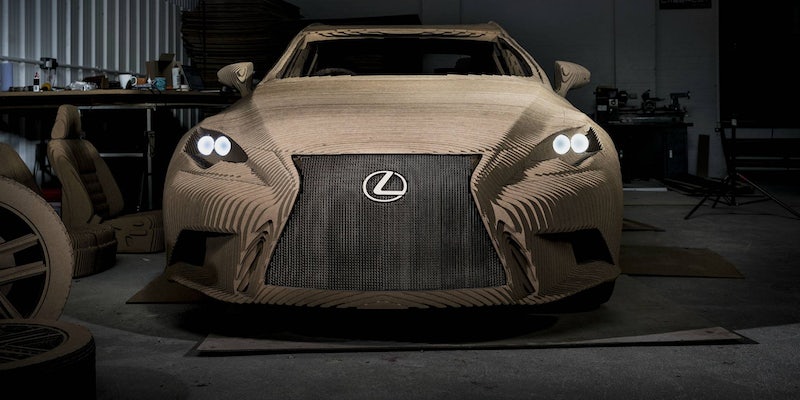 Lexus just made an electric car out of cardboard

Lexus has designed a one-off electric car modeled after the IS sedan.

It looks like the marketing team at Lexus was given a blank check to make whatever the hell they wanted. Given a hoverboard, a car that responds to your heartbeat, and now a cardboard electric car, it seems that no expense was spared to paint Lexus as futuristic as possible.

Yes, Lexus, the company known for supplying your dentist’s car, has made a cardboard electric car modeled after the IS Sedan that actually works. Granted it’s not very fast—you can only get so much traction with cardboard wheels.

The company is calling it an origami-inspired car, “celebrating the skills of Lexus’s takumi (Japanese for artisan) craftsmen and women.” It was crafted from 1,700 recyclable cardboard sheets, laser cut, and glued together.

The car isn’t all cardboard, it has a steel and aluminum frame, and does have working headlights. According to Ruben Marcos, founder and director of Scales and Models Company, “this was a very demanding job, with five people involved in the digital design, modelling, laser cutting and assembly.” It took the team three months to finish the project. Given the results, we think it was well worth it.