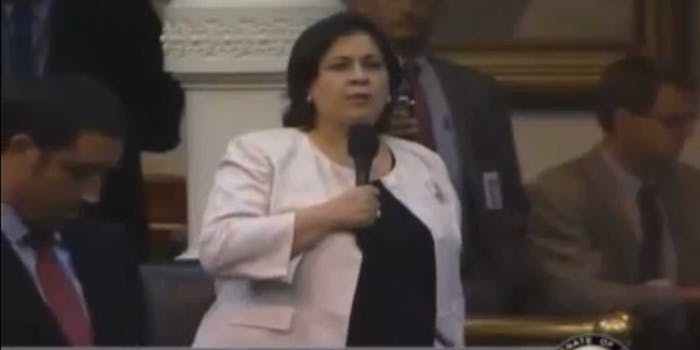 State Sen. Davis made news yesterday on Twitter and Facebook—though not on the actual news networks, who were too busy covering a broken cruise ship, and in CNN’s case, the caloric content of a blueberry muffin—for her decision to filibuster SB5, the toughest anti-abortion bill in the country, which would effectively shut down all but five clinics in the Lone Star State.

To be able to successfully filibuster the bill, Senator Davis had to speak continuously and on topic for 13 hours—she started at 11am CT and had to speak until midnight—without a break for food, water, or to use the bathroom.

Despite a valiant effort, the Republican-led house managed to kill Davis’s filibuster at around 10pm CT after issuing her a third strike for germaneness.

All hope seemed lost and SB5 looked like it was going to be put to a vote, when Davis’s Democratic colleagues launched a two-hour debate on parliamentary procedure on whether the third strike was valid. The highly technical arguments enthralled and engaged the more than 178,000 people who had tuned in to the Texas Tribune‘s live YouTube broadcast of the proceedings.

But even these procedural debates looked like they were coming to an end when acting chairman Sen. Robert Duncan, with roughly 11 minutes to go before the midnight deadline,  overruled any and all objections to the way the third strike of germaneness was handled.

That’s when State Sen. Leticia Van de Putte, who had driven from San Antonio to Austin the same day she buried her father, delivered what was essentially a knockout punch.

Upon her delivery, the gallery erupted into cheer and celebration for more than 10 minutes, well into the midnight deadline. The cheers essentially derailed the proceedings and prevented a vote from taking place before the permissible time limit.

The Republican-led Senate, of course, claimed that a vote to pass the controversial SB5 took place well before midnight. The Associated Press, citing Texas Lt. Governor David Dewhurst as its source, reported this as news.

That report, however, was overturned. A number of Twitter users caught that the Texas Senate had actually altered the timestamps on state documents to show that the vote took place on Tuesday, not Wednesday.

Dewhurst and his Republican cohorts eventually conceded that the anti-abortion bill had failed to pass.

At the end of the night, Davis and Van de Putte, no doubt emotionally and physically exhausted from what had just transpired, shared a brief embrace on the Texas Capitol rotunda.