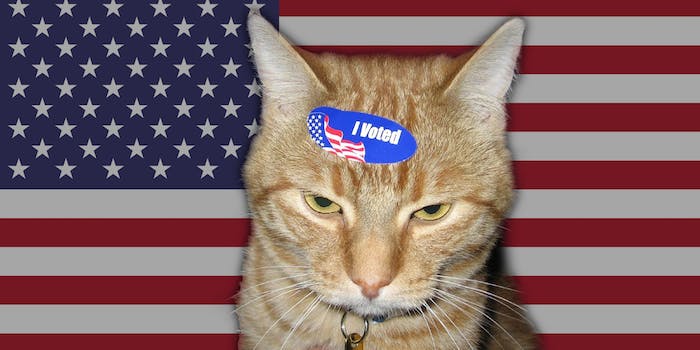 The Koch brothers are sending voter spam to cats

This time they've gone too far.

Charles and David Koch, the arch-conservative billionaire ghouls whose influence pervades all strata of American politics, have hit a new low: suppressing the feline vote.

In North Carolina, where Democratic Senator Kay Hagan leads Republican challenger Thom Tillis by three points in her bid for reelection, the Koch brothers’ Americans For Prosperity advocacy group had been hammering the incumbent for supporting the Affordable Care Act, i.e., Obamacare. Now they’re mailing out instructions for voter registration that aren’t exactly helpful, or accurate, or intended to increase voter turnout in any way. Whoops!

While hundreds of humans received AFP’s “official application form”—which the State Board of Elections said misstates the deadline for registration, includes an incorrect ZIP code for sending in completed paperwork, and offers dead-end tips for voters with further questions—the spam also reached at least one cat, according to Raleigh’s News & Observer:

[H]undreds of people who received the forms have called and complained to the State Board of Elections, said Joshua Lawson, a public information officer for the board.

“It’s unclear where (Americans for Prosperity) got their list, but it’s caused a lot of confusion for people in the state,” Lawson said.

One resident even received a voter registration form addressed to her cat, he said.

Casey Mann, Executive Director of the North Carolina Democratic Party, has since asked the Board of Elections to investigate the mailers, whose conflicting and misleading statements could constitute a “low-grade felony.” AFP, of course, is blaming “minor administrative errors.”

However this shakes out, we hope the Kochs have learned a lesson: You can keep people away from the polls all you like, but never shall any furball’s catstitutional rights be infringed upon.