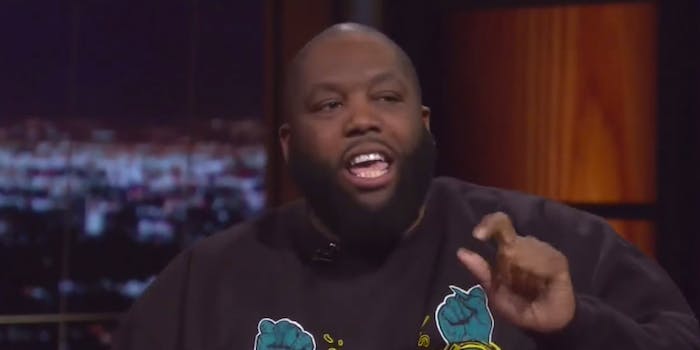 A wag of the (middle) finger.

During an interview on Friday night’s episode of Real Time With Bill Maher, rapper Killer Mike, one-half of the world-conquering hip-hop duo Run the Jewels, responded to O’Reilly’s recent comments about the corrosive effects of rap music on American culture.

In a segment on Wednesday discussing a results of Pew study showing the number of Americans identifying as Christian dropped from 78 percent down to 70 in the span of the past seven years, O’Reilly pointed the finger at hip-hop as factor behind the decline in religiosity.

“The rap industry, for example, often glorifies depraved behavior, and that sinks into the minds of some young people—the group that is most likely to reject religion,” O’Reilly charged.

“I like Bill O’Reilly as a character,” Killer Mike told Maher, “but I hate how white people take him so seriously.”

“[O’Reilly is] more full of shit than an outhouse,” he continued. “I’m gonna go in a black club and see O’Reilly with a stripper in his lap…We know it’s an act.”

Maher pushed back, saying that he knows O’Reilly personally and that the cable news renovator actually means everything he says. “He may be full of shit,” said Maher, “but it’s sincere shit.”

Maher added that the criticism is ridiculous because the group of people least likely to leave Christianity were African-Americans.

“Jesus was the original rapper though,” Killer Mike noted. “He was a black guy, or at least dark. Hung with a posse of homies, one of them was strapped with a knife. Went to war with the government [and] lost like a lot of black guys do. And everybody loved him more after he died, like Tupac.”

Later in the show, Maher asked Killer Mike about criticisms that hip-hop is too violent and the rapper launched into a condensed history of the genre as a mechanism for empowering the underprivileged.

Hip hop as an entity was started in the last 60s, early 70s…A bunch of kids were the fallout kids of the black nationalist movement, civil rights, poor white people’s movement, Puerto Rican nationalism movement. They had street gangs in New York in the Bronx there were essentially just burnt out. At some point…these kids were like, we’re going to come up with our own peace treaty…[and] decided they weren’t going to engage in violence. What’s the alternative to violence? The Zulu Nation was born out of that. Afrika Bambaataa, [DJ] Kool Herc….These kids, they were children, got together in the park, stole public electricity, which I strongly support, and decided to do park jams as an alternative to violence.

So hip hop is not rap. Hip hop is the thing that houses rap, graffiti, breakdancing, DJing and entrepreneurship. What it did was give poor kids the opportunity to organize as an alternative to violence.

Now, fast-forward 40 years, it worked. A lot of money came into it. Guys bought big chains, tigers, lions and bears, and shit. And we got off course. But, at our core…every time you see a successful rapper, you’re seeing a job creator in a community. Jay-Z has provided hundreds of jobs and crated hundreds of millionaires…Outkast in Atlanta personally changed the economy in the last 20 years. I would say that people who say that hip hop is violence, I would say, let’s start with the real violence starters. Let’s start with the three major Abrahamic religions, let’s do away with their books. Let’s start with governments and and geo-world politics. Let’s do away with our leaders. So after we get down the violence scale, with all the things that crate real violence, until we get to music. It will easy to get hip hop [to change]. People in hip hop want to do the same thing you do, talk shit about politics, smoke weed, and date dope black women. That’s it.

In recent months, Killer Mike has emerged as one of hip-hop’s loudest voices for political engagement. During a concert in St. Louis shortly after the announcement of a grand jury’s decision not to file charges against Ferguson police officer Darren Wilson for the shooting death of African- American teenager Michael Brown, the rapper made an impassioned speech about trying to raise his two sons in a country where they could be killed with impunity by police officers at any moment.

Killer Mike’s last album with Run the Jewels, entitled Run The Jewels 2, was one of the most critically acclaimed albums of 2014. Run the Jewels producer/rapper El-P took to Instagram earlier this week to tease a snippet of the upcoming follow-up record.