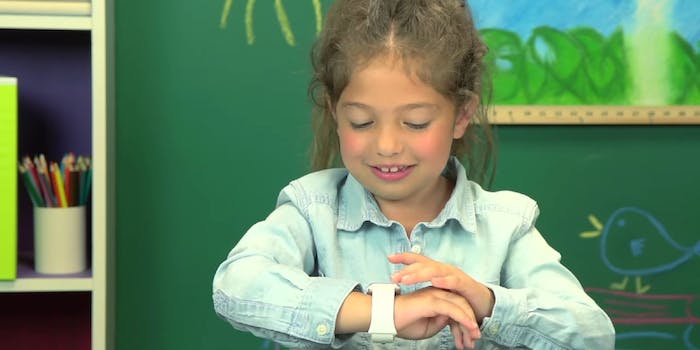 When the Apple Watch first came out, I knew instantly in an old-fogey kind of way that I would not be able to enjoy another gadget accessory that does exactly what an iPhone can do.

Would the youngins love it, though?

In the newest “Kids React” video, the Fine Bros. depart from their usual show-children-retro-technology schtick and instead enlist them to test the latest modern tech has to offer: the Apple Watch.

“Eeeeeeh, new stuff!” 9 year-old Samirah excitedly exclaims at the beginning of the clip. That’s generally how we feel about brand-new gadgetry as well, and as expected, a bunch of them were rendered speechless by the Apple Watch’s sleek design and overall attractiveness. When it came down to testing out the smartwatch’s many functions, though, there were a few objections.

The consensus is in: The Apple Watch AKA “the future watch” is super-duper awesome, but needing an iPhone to get it to work is “just dumb.”

In reality, however, whether we need the Apple Watch or not, the fact that Apple made it will surely garner it a sizable fan following. 10 year-old Kacey said it best: “Some people are just like, ‘Oh my gosh, this is the new fad, I need it, I need it!’ If you don’t need your phone to do all these things with you, then I think this might be a really big hit and everybody would want it. I know I would.”