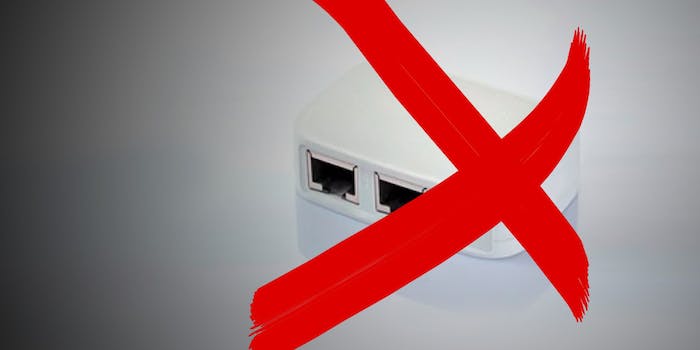 Less than a week after it began, it's over.

Kickstarter has suspended Anonabox, the controversial privacy-centric router that raised nearly $600,000 in a week.

The router claimed to be four years in the making, and offered access to the Tor network by default. But its detractors pointed out that its hardware was remarkably similar—if not outright identical—to that being sold online by Chinese retailers for $20 a pop.

Others pointed out that its promotional material appeared Photoshopped, and, as Business Insider highlighted, there appeared to be a backdoor into the system accessible via the default password “developer.”

One of the #anonabox shots in the Kickstarter video is pretty clearly a ‘shopped version of an Alibaba photo pic.twitter.com/LGMsTSCzg3

Prior to the backer backlash, the router received widespread praise in the press, a media-friendly backstory including drawing inspiration from the Arab Spring encouraging write-ups in the Guardian, Wired, TechCrunch and beyond. (The Daily Dot also covered the anonabox campaign before accusations of inaccurate claims about the product.) Even as people realized not all was as it seemed, funding kept pouring in. All in all, anonabox raised $585,549 before Kickstarter pulled the plug.

The Daily Dot had previously confronted anonabox’s lead developer, August Germar, over the claims about the device’s hardware, to which he’d responded that it was custom-designed by an electrical engineer—though he had “found out … that there is at least one hardware product that is very similar.” Germar failed to respond to questions over whether part or all of the project was sourced from Alibaba, and Kickstarter, apparently unconvinced by his defence, permanently suspend the campaign on Friday afternoon.

A Kickstarter spokesperson told the Daily Dot that the company does not comment on suspended campaigns. However, the company’s Trust and Safety guidelines stipulate that project creators must be honest and responsive—something Germar failed to do, notably in an evasive Q&A session on Reddit.