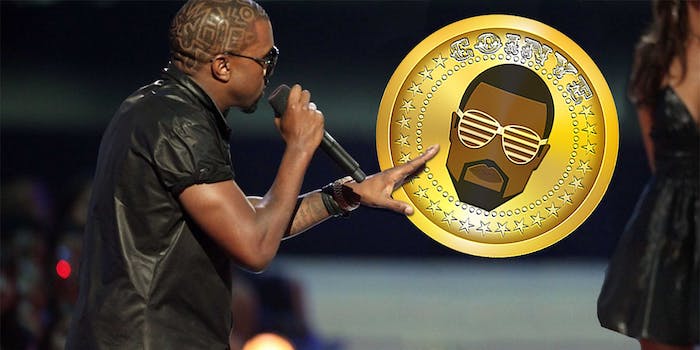 Yeezus triumphs in the most important court battle of our time.

It took 189 days, but it’s now over. Last week, a United States district court declared rapper Kanye West the victor in a lawsuit filed against David McEnery, Richard McCord, Harry Willis, and a gaggle of other unidentified individuals, who were responsible for founding the short-lived bitcoin offshoot Coinye.

The online currency, originally founded Jan. 11, operated similarly to bitcoin in its early days, offering users a way to trade currency online and buy things without actual greenbacks. Its existence proved short-lived, however. The immensely popular rapper filed a lawsuit against Coinye’s founders three days after its origination, and Coinye shut down. “COINYE IS DEAD,” its website read on Jan. 14. “You win, Kanye.”

Coinye went away, but the man who inspired its name didn’t forget about it. In March, two months after Coinye’s founders responded to a cease-and-desist, West amended his lawsuit to include names, background information, and corresponding emails of selected defendants, who the rapper and his legal team declared “cowardly sought to remain anonymous by using Registry privacy services and other means to stay hidden.”

West and the Coinye defendants settled last Tuesday for unspecified damages, though court documents show that a number of the unidentified defendants—those who were not named in West’s original lawsuit—did not bother to respond to any of the complaints filed.

NBC reports that West’s lawyers filed 84 court documents throughout the seven month proceedings. Now that it’s over, they can turn their attention to defending the rapper’s wife against the imminent origination of Kim Coindashian.