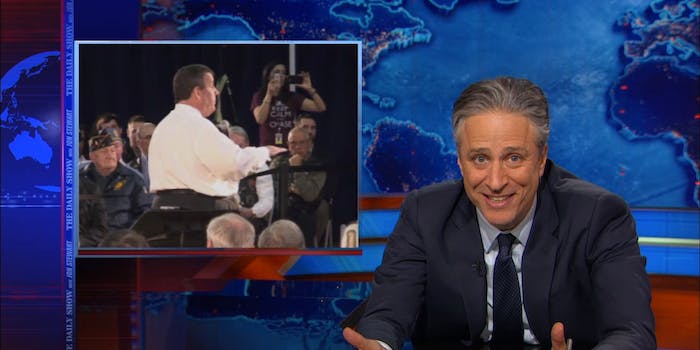 Stewart has been waiting all his life for a story like this.

New Jersey has been the target of many negative headlines and jokes at its expense, but the state will always have a special place in its heart for corruption.

Many New Jerseyans—including this writer—would prefer that the state’s politicians cease to be known primarily for corruption, but given that this wish isn’t likely to come true, the least we powerless citizens can do is make fun of it ourselves.

The best-known critic of New Jersey’s political corruption is Daily Show host and N.J. resident Jon Stewart. On Thursday night, he was presented with the corruption holy trinity: N.J. Gov. Chris Christie, a shady settlement deal with ExxonMobil, and Sen. Bob Menendez (D-N.J.), who is currently facing corruption charges from the Justice Department.

Thanks to Gov. Christie’s efforts, ExxonMobil only had to pay $250 million—a fraction of the $9 billion for which it was sued—after a chemical spill that looked like, in Stewart’s words, “Satan’s skunk had diarrhea.”  But even Christie’s dubious use of those meager settlement dollars is nothing compared to the allegations against Sen. Menendez and the fact that even clear-cut corruption is still called “fuzzy.”

“Oh, there’s prostitution in this story, but I don’t think they’re from the Dominican Republic,” Stewart said, referencing a debunked claim about the senator hiring underage prostitutes.