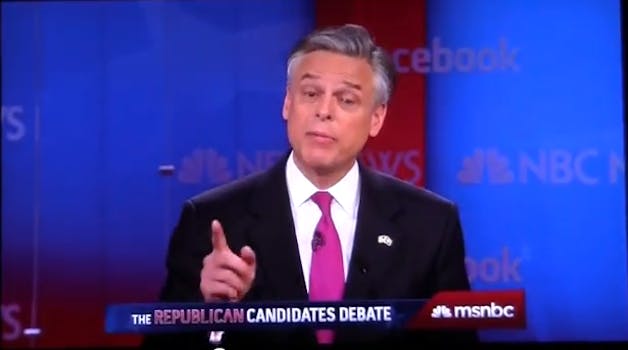 When Jon Huntsman endorced Mitt Romney, he had a bit of cleaning up to do.

While political pundits asked why a seemingly ideal candidate like Jon Huntsman never caught on with Republican voters, his campaign silently and swiftly took down negative campaign ads  that targeted the man he endorsed on Monday: Mitt Romney.

Huntsman officially ended his campaign for the Republican presidential nomination on Monday following a poor performance in the New Hampshire primary last week. The former Utah governor and ambassador to China endorsed frontrunner Romney—and then his campaign    apparently tried to erase the evidence Huntman’s  at times, scathing attack ads on Romney.

Those ads were missing from the campaign’s YouTube page on Monday afternoon. They included the newest, which used footage of Huntsman defending his time as ambassador in China and attacking Romney for staying home and “raising money.” The footage from those commercials is still available on other YouTube pages, as well as some of the original ads that called Romney a flip flopper.

Yet, while the ads attacking Romney disappeared, those going after Texas Rep. Ron Paul, who came in second in New Hampshire, remained on the YouTube page.

Unlike some candidates who have dropped out, the Huntsman camp hasn’t let its social media properties sit cold and a heartfelt thanks was posted on Facebook for supporters. Although the big question people were asking was what will happen to the social media savvy @Jon2012girls. They have been quiet for the last few days, but did thank supporters on Monday.

“Many flames burn out in politics, our Dad’s has just been ignited. What an incredible journey for our family. Thanks for all the support!” they wrote.