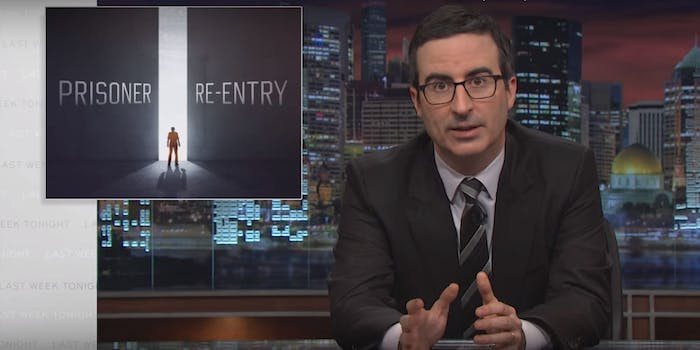 John Oliver explains why the deck is stacked against former prisoners

Oliver makes a good case for changing the way we handle prisoner re-entry.

From mandatory minimum sentencing to the woeful state of our public defender service, Last Week Tonight host John Oliver has devoted hours of airtime to exploring weaknesses in the U.S. criminal-justice system. His latest target is a problem that many people fail to even consider: what happens to offenders after they leave prison.

In many states, former prisoners can’t collect welfare. Combine this with harsh parole guidelines and the difficulty of finding a job as a convicted felon, and it’s no wonder so many of them end up back in prison.

After turning a sympathetic eye to the difficulties faced by former prisoners, Oliver ended the segment on an unusual note. Instead of filming a funny PSA, he interviewed Bilal Chatman, a man who successfully turned his life around after spending a decade in prison.