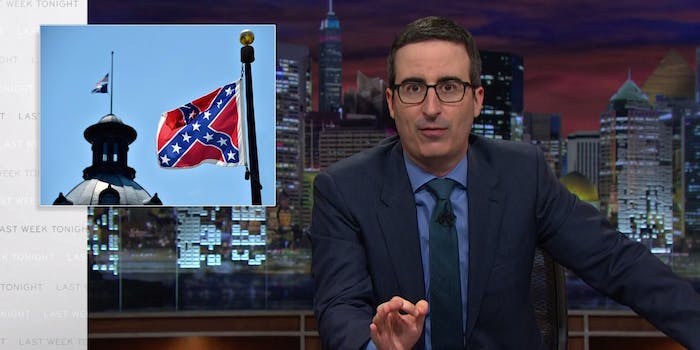 John Oliver knows exactly what to do with the Confederate flag

It was racist then, and it's racist now.

Count John Oliver in to “take it down” when it comes to the neverending, perplexing debate about the Confederate flag.

It flies at full mast above the South Carolina statehouse even in the wake of the Charleston shooting that left nine people dead last week, which led to many people calling for the state to take it down because of its long association with slavery and white supremacy. But it’s more complicated than it seems: Due to a 2000 state law, the flag can only be removed with a two-thirds majority vote in both parts of the state legislature.

Oliver, who believes the only reason to have the Confederate flag is so that we can easily identify the worst kind of people through clothing featuring it, has a solution.

“When it’s at half staff, why not keep lowering it all the way down?” Oliver said. “And once you’re holding it in your hands, take it off the flagpole completely, fold it—or don’t bother—put it in a box, label it Bad Flag and put it some place no one can see.”