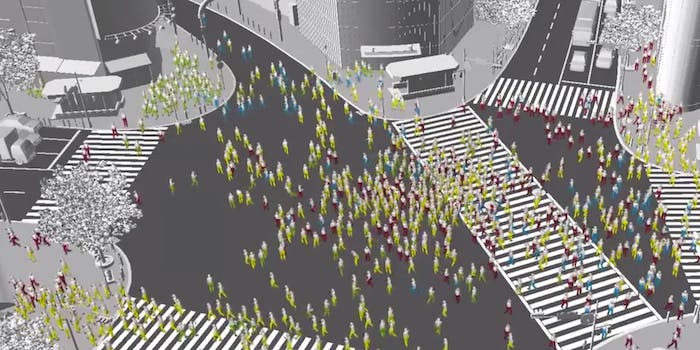 Here’s what happens when 1,500 people walk and text at the same time

We’ve seen the future, and it involves a lot of tripping.

Those who follow the communicative and technological trends in Japan surely know it by now: Like damn near every other developed country on this planet, they’re big on communicating over mobile technology. And like those who live in cities around America, they like to do it all of the time—even when they’re walking.

Unlike the American cities we mention, mobile phone carriers around Japan are beginning to do their part to advise against such steady texting activity. In recent months, companies like NTT Docomo have begun educating their users about the perils of texting while walking.

On Friday, the company released the YouTube video seen below along with a message insinuating that one in every five people who walk while using a cellphone end up experiencing an accident or injury. The video’s animated to appear as though it occurs at Shibuya Crossing, essentially the Times Square of Tokyo.

“Attention to the surroundings is neglected while walking around staring at your cellphone,” it says.

Yeah, but did they have to make the noses so silly?