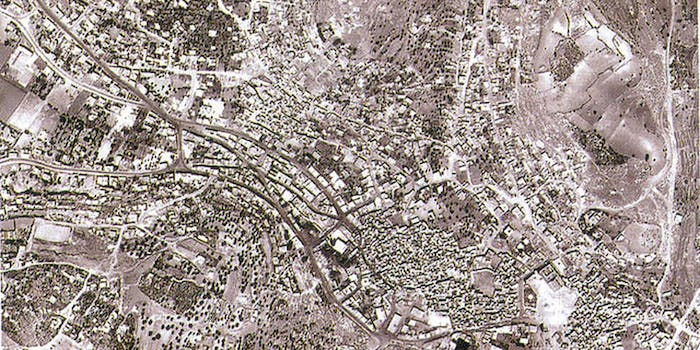 Twitter is far wider and stranger than an index of celebrity non-thoughts.

Proving once again to the naysayers that Twitter has far wider—and stranger—applications than as an index of celebrity non-thoughts, the nation of Israel has begun to tweet a blow-by-blow account of the Six-Day War, which began 46 years ago Wednesday.

The Israeli Defense Forces account, @IDFSpokesperson, announced the time-warp project on June 4, and since then a new account, @IDF1967, named for the year of the conflict, has provided a steady stream of military updates. The tweets themselves, more than 150 for the war’s first two and a half days, are in Hebrew but easily translated with the usual software. Of course, you’ll have to highlight the text backward.

A typical entry, from earlier today, once you clean up the translation, reads:

“Shortly before, the Nablus governor also signed the surrender. Chief reiterates to the forces: Do not harm in any way the Arabs of settlements in Judea and Samaria.”

Nablus, a city about 50 kilometers north of Jerusalem, had been occupied by the British protectorate known as the Emirate of Transjordan since the 1948 Arab-Israeli War. But on this day in history, that changed.

Over the course of the 1967 conflict, Israel also went on to gain control over the Gaza Strip, West Bank, East Jerusalem, Sinai Peninsula and Golan Heights in a decisive victory no doubt aided by the element of surprise: the initial bombing raids of June 5 came at a time of extreme friction but were not a foregone conclusion.

“In response to repeated provocations by Egypt, Israel and the IDF go to war. Did not sit intertwining hands when enemy forces tighten the noose around our throats.”

Twiddling your thumbs, intertwining hands, whichever: Israel wasn’t having it. There’s no mistaking this feed for anything other than a one-sided telling of a traumatic week in history, and there doesn’t seem to be an Arab equivalent. All the same, a few pictures do help us access the reality of the region at that time, and these may be the first Vines culled from stock war footage: