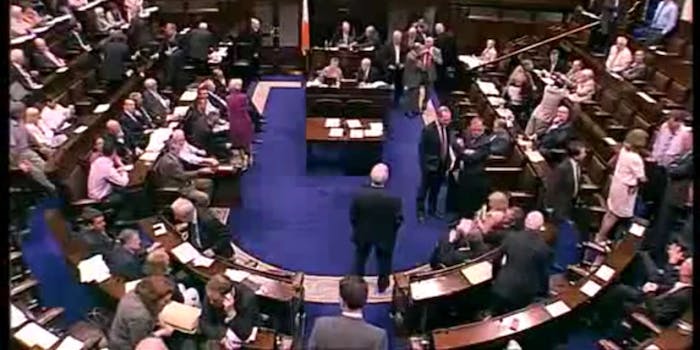 The phrase “lap dunce” has also been used to describe MP Tom Barry after the embarrassing incident.

There have been many harrowing stories from the current Texas abortion bill battle, and a few baffling ones. With equally restrictive abortion bills in Wisconsin, Ohio ,and North Carolina making the rounds, one might start to wonder: What do abortion legislation hearings look like in Europe?

Well, we may have an answer. Late last week, this video of Irish Member of Parliament Tom Barry pulling his colleague Aine Collins onto his lap during the proceedings surfaced. Barry has since apologized, chalking it up to hitting the Dáil bar before heading into the early morning hearings to pass Ireland’s Protection of Life During Pregnancy Bill. The phrase “lap dunce” has also been used to describe Barry.

The Dáil is the Irish equivalent of the U.S. House of Representatives, and yes, they have a bar, which  has been heavily criticized since the incident. Perhaps Ireland should consider Sarah Slamen’s refrain from last week’s viral testimony: Everyone on the Internet can see what you’re doing right now.