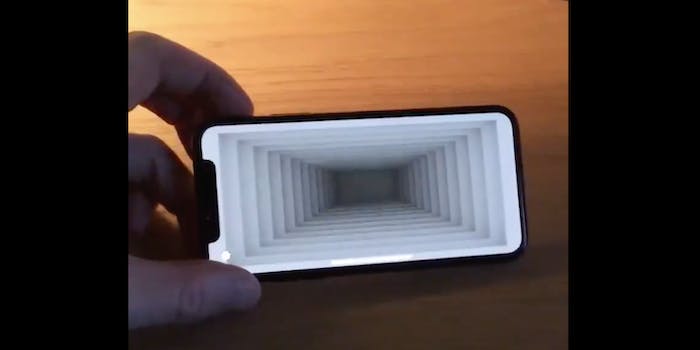 The illusion makes your iPhone look like a never ending, portable hole.

Swedish artist Peder Norrby turned his iPhone X into a portable hole—at least, that’s what it looks like at first glance.

Norrby shared his invention, called the Parallax View, on Twitter on Feb. 26. The optical illusion—which Norrby says he created with no post effects—makes your phone look like there’s a never-ending hole in the center of it.

The optical illusion uses the iPhone’s 3D camera and ARkit face tracking to identify the position of the eye and adjust the image displayed on the iPhone X screen to create the illusion that you’re looking down into a three-dimensional hole.

“Please note this is a monoscopic effect. When using the app, the illusion is best seen with ONE EYE – the other eye closed. (Also works great for video since video is monoscopic),” Norrby tweeted. “For a stereo effect some type of glasses would be needed (anaglyph or active) and app adapted for it”

Norrby has turned his creation into an app, which he said is in review for Apple’s App Store.