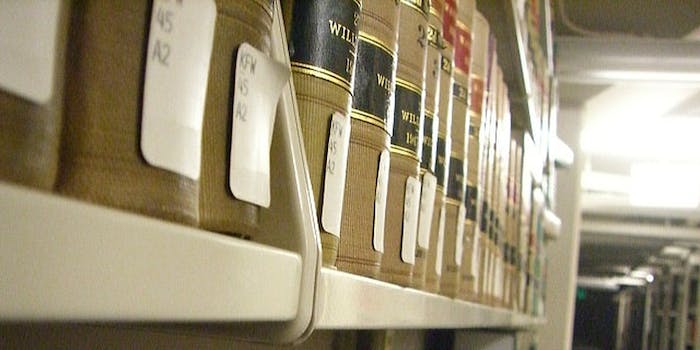 As anyone who has ever attempt to talk their way out of a traffic ticket will tell you, claiming ignorance of a law doesn’t preclude one from actually having to follow said law. Even if you didn’t know the speed limit on a particular stretch of highway was 55 miles per hour, you’re still going to get slapped with a fine if a cop catches you doing 75.

While much of the the United States legal code isn’t exactly written in something that the average person would consider “English,” the laws are still technically out there and anyone with enough time, motivation and legal training on their hands could theoretically learn about the government’s every mandate and prohibition to their heart’s content.

However, the availability of the text of U.S. law isn’t universal. There are some instances where portions of the law are written and controlled by private entities who often charge a pretty penny, sometimes into the thousands of dollars, just to let people read all of the very specific things that government has required them to do.

The operators of the open government site Public.Resource.org have made it their mission to put as many of these regulations online as possible in an effort to the fight what some see as the privatization of the U.S. legal code. The long-standing government transparency activists accomplished this goal by purchasing access to the documents and then flouting the myriad of warnings they contain about keeping the information contained wherein private.

Unsurprisingly, the publication of this info has not made the cadre of industry groups who hold the copyright to these laws, which pertain to everything from rules about bike helmet safety to guidelines on how to test for lead in drinking water, particularly happy.

A coalition of three such groups–National Fire Protection Association, ASTM International and the American Society of Heating, Refrigerating and Air Conditioning Engineers–filed a lawsuit in federal court earlier this month accusing Public.Resource of “massive copyright infringement.”

“The question is about if the organizations that create these codes can claim copyright when they’ve been incorporated into law,” said Mitch Stoltz, a staff attorney at the online rights advocacy group Electronic Frontier Foundation, which has signed on to help Public.Resource.org in the case.

Stoltz, who noted that violating some of these codes can result in serious civil or criminal repercussions, argued that there is court precedent stretching back nearly a century holding that when something is incorporated into the law of the land it immediately becomes part of the public record.

Public.Resource.org was handed a major victory earlier this year when it prevailed in a battle against the Sheet Metal and Air Conditioning Contractors Association over the group’s refusal to make a federally-mandated standard regarding a set of environemental safety regulations publicly available. In July, as a result of a lawsuit filed by the Electronic Frontier Foundation on the nonprofit organization’s behalf, the industry group decided to stop claiming copyright over the law and now they’re open to anyone who seeks them—free of charge.

“In today’s technical world, public-safety codes are some of the country’s most important laws,” wrote the Electronic Frontier Foundation in a press release. “Public access to such codes can be crucial when, for example, there is an industrial accident, a disaster such as Hurricane Katrina, or when a homebuyer simply wishes to independently consider whether her house was built to code standards. Publishing the codes online, in a readily-accessible format, also makes it possible for reporters and other interested citizens to search, excerpt, compare, and copy them.”

Jim Shannon, the president and CEO of the National Fire Protection Association argues that not only are some of the codes free to view online—merely requiring a fee for downloadable or hard copies—but that charging for access is precisely what allows organizations like his to be able to fund the in-depth research that goes into the laws’ creation.

“The system we have in place in the U.S. is a good one,” he insisted, noting that his company employs hundreds of technicians to do things like update the standards for electrical systems used in buildings around the globe on an annual basis. “If you choke off the revenue that feeds the system, safety is going to suffer.”

The lawsuit is currently ongoing.