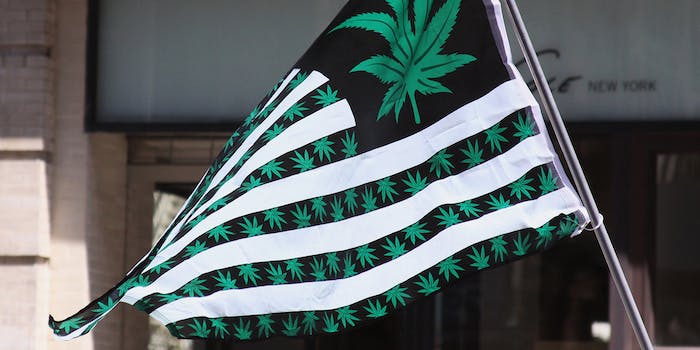 Church would allow members to use marijuana as part of 'religious practices.'

It’s no secret that Indiana’s Religious Freedom Restoration Act, which made national headlines earlier this year, was a blatant attempt to suppress LGBT rights. But in a case of surely unintended consequences, the controversial law has done a lot to advance another “lifestyle.”

On Tuesday, Indiana legally recognized the First Church of Cannabis, a group claiming to be devoted to harmony, kindness and—you guessed it—pot.

The First Church of Cannabis is a relatively new denomination, set to hold its first services on July 1, the first day the religious-freedom law goes into effect, according to Forbes. And by obtaining recognition from the state under the new law, church members (who call themselves “cannataerians”) will reportedly be allowed to light up during their church services, even though they will practice in a state where marijuana is still a highly illegal substance. It’s all thanks to Indiana’s recently reinforced religious freedoms.

The church, which appears to be more a satirical political movement than a religious institution, will not be allowed to buy or sell marijuana, but its leader, the self-described Minister of Love and Grand Pooba Bill Levin, says members will be allowed to partake in marijuana use as part of their religious practices.

“If someone is smoking in our church, God bless them,” Levin said, according to Death And Taxes. “This is a church to show a proper way of life, a loving way to live life. We are called ‘cannataerians.’”

This isn’t the only win for the church and its double-edge political message in favor of legalizing marijuana and ending oppression disguised as religious freedom. The church was granted tax-exempt status last week by the IRS, a major win for a church founded in March on the foundations of not being an Internet troll and not poisoning one’s body with “poor quality foods and soda.”

“Somebody at the IRS loves us because we got it back in less than 30 days,” Levin wrote on the group’s Facebook page.

With its tax-exempt status and state recognition in hand, the First Church of Cannabis is already off to a strong start. It has already collected over $11,000 from more than 600 members via its GoFundMe page, where the minimum donation is, of course, $4.20.