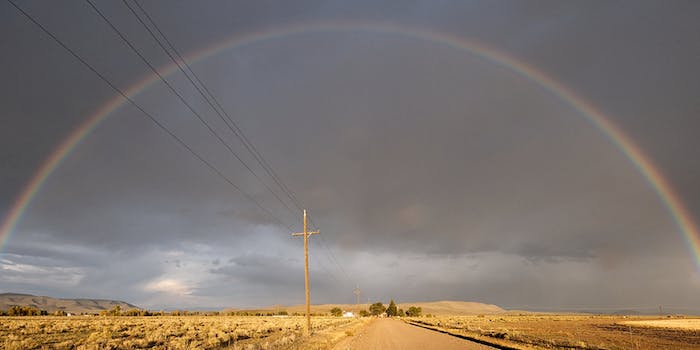 One of the biggest voices against gay marriage tweeted out a photo of ironic proportions the same day that same-sex unions became legal in 60 percent of the U.S.

On the morning of Oct. 6, Indiana State Senator Mike Delph (R) discovered a rainbow outside his door, and while he didn’t have any life-changing epiphanies, he felt compelled enough to tweet about it.

Most beautiful rainbow ever hovers in Carmel near OLMC! Sign of God’s promise to mankind.

And for good measure, he posted a photo of it.

Somewhere over the rainbow from the Delph driveway. 6OCT14 pic.twitter.com/IvoPB6PHy4

Just a few hours later, the Supreme Court’s decision to not hear appeals court rulings that overruled state same-sex marriage bans for Indiana, Oklahoma, Utah, Virginia, and Wisconsin gave couples in those states the right to legally marry. Delph’s constituents probably don’t believe Delph, who has a history of going off on Twitter tirades about gay marriage, has changed his mind, but they found the photo of a rainbow, a symbol of gay pride, to be a fantastic case of irony and foreshadowing.

So, on day @MikeDelph tweets about a rainbow and God’s promise, the Supreme Court paves the way to legal gay marriage. Nice foreshadow.

.@MikeDelph God must have been dropping a hint to us about today’s Supreme Court Ruling! God is truly great, and loves all his children!

Symbol of #equality. RT @MikeDelph: Most beautiful rainbow ever hovers in Carmel near OLMC! Sign of God’s promise to mankind.

Delph told IndyStar that he was only “pointing out what I believe” with the photo.

“Just because someone claims a religious symbol and gives it some other meaning doesn’t change the original meaning,” he said. “I don’t think people of faith should be intimidated by anyone trying to take away the authority and legitimacy of scripture.”

While he hasn’t responded to any of his Twitter critics, we know he’ll have a lot to say when he does.

Don’t worry. @MikeDelph will return to Twitter after completing his Constitutional tutorial to the United States Supreme Court.