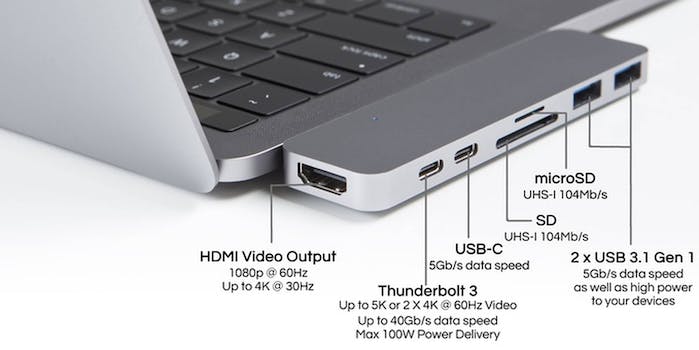 HyperDrive dongle is the answer to MacBook Pro’s biggest problem

One simple add-on lets professionals actually do their jobs again.

When Apple announced its recent reboot of the MacBook Pro, many users were understandably annoyed to find out that, along with the machines’ $1,799 starting price, they lack nearly every port users had come to expect. Do you use USB or the SD card reader? How about HDMI? Tough luck. You get 3 Thunderbolt ports and 2 USB-C ports, so make room in your bag—and budget—for adapter dongles. Thankfully one accessory is stepping up to the plate to solve this problem.

Meet the HyperDrive, one dongle to replace them all. The HyperDrive gives you all of the ports that used to come standard on a professional-level computer, and then some: two USB 3.1 ports, one USB-C, both Micro-SD and SD card slots, one Thunderbolt 3 port, and an HDMI video output. You’re sadly still stuck without an ethernet port, so God help you if there’s no Wi-Fi, but otherwise, this one little dongle fixes Apple’s latest “improvement” to the MacBook Pro.

With an expected retail price of $100, the dongle isn’t cheap, but considering how much it would cost to replace these ports individually, this is a steal. Also if you pledge through the ongoing Kickstarter campaign, the price drops to only $70. The Kickstarter campaign doesn’t end until Jan. 16, with early bird rewards shipping in February 2017 and the rest shipping in March 2017.

As always with Kickstarters, it’s important to remember the possible dangers of participating in crowdfunding, like, say, never getting your product. Still, the balance of reward to risk offered here may be too good to pass up for Mac addicts. Because even if you’re waiting a bit for your HyperDrive, when it arrives, you’ll have a full MacBook Pro again. Head over to Kickstarter to preorder yours today.