We've got you covered.

It’s officially open season for throwing elbows at the mall to score deals on sweet holiday gifts. Whether you’re gifting, giving, or dropping unsubtle hints to your loved ones, our holiday gadget buyer’s guide has at least one something for everyone, and probably two. 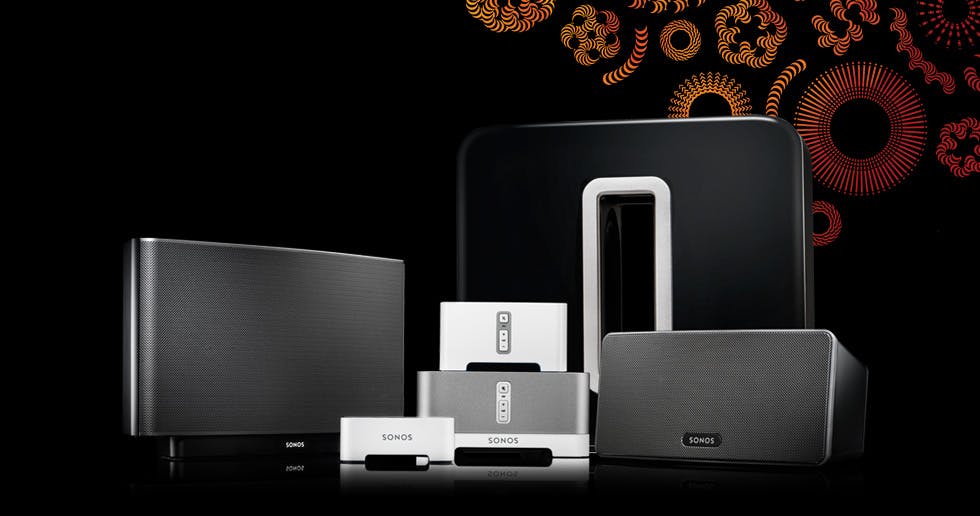 The king of home audio hardware is still calling the shots for good reason. While a Sonos home audio system costs a bit up front, having a modular home speaker system you can control with your phone is awesome. If you’re a casual music listener, even a few of the smaller Sonos Play:1 speakers ($199) around the house can make for an awesome, easy to set up listening experience.

Bluetooth speakers have come a long way, and now they’re light, rugged, and pack surprisingly good sound. Jawbone’s Jambox line is well liked for its playful design, durability, and big sound in a small package as is UE’s BOOM and Mini BOOM line. But there are a lot of good options out there, even from more obscure brands like Oontz, which offers a great little speaker called the Oontz Angle for less than $35. 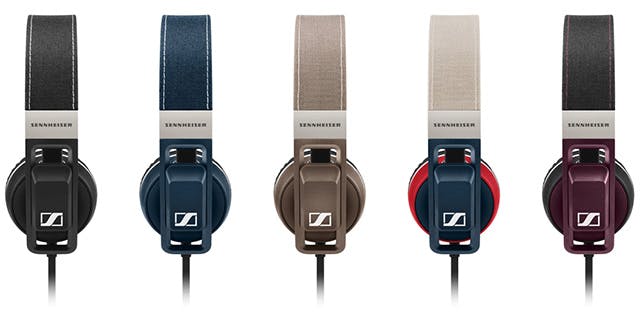 Sennheiser isn’t as flashy as Beats or as popular as Bose, but we think the sound is superior—and with two new lines, they finally look as cool as they sound. OK, the name is dumb, but the Urbanite on-ear and Urbanite XL over-ear cans are super sweet, and Sennheiser sound finally doesn’t have to look boring. Headphones are about fashion too, I mean just look at the denim on these puppies. There’s also a newish cheaper Momentum line, which still looks way more fun than anything Sennheiser has put out before.

On the lower end, Incipio’s f38 over-ear headphones are worth a look for great sound under $50. And for wireless options without a huge sacrifice in sound or a ridiculous price tag, we heeded Wirecutter’s advice and have been really pleased with the Jabra REVO Wireless Stereo headphones, which are surprisingly premium considering they’re less than $200—way less if you can snag them on sale. 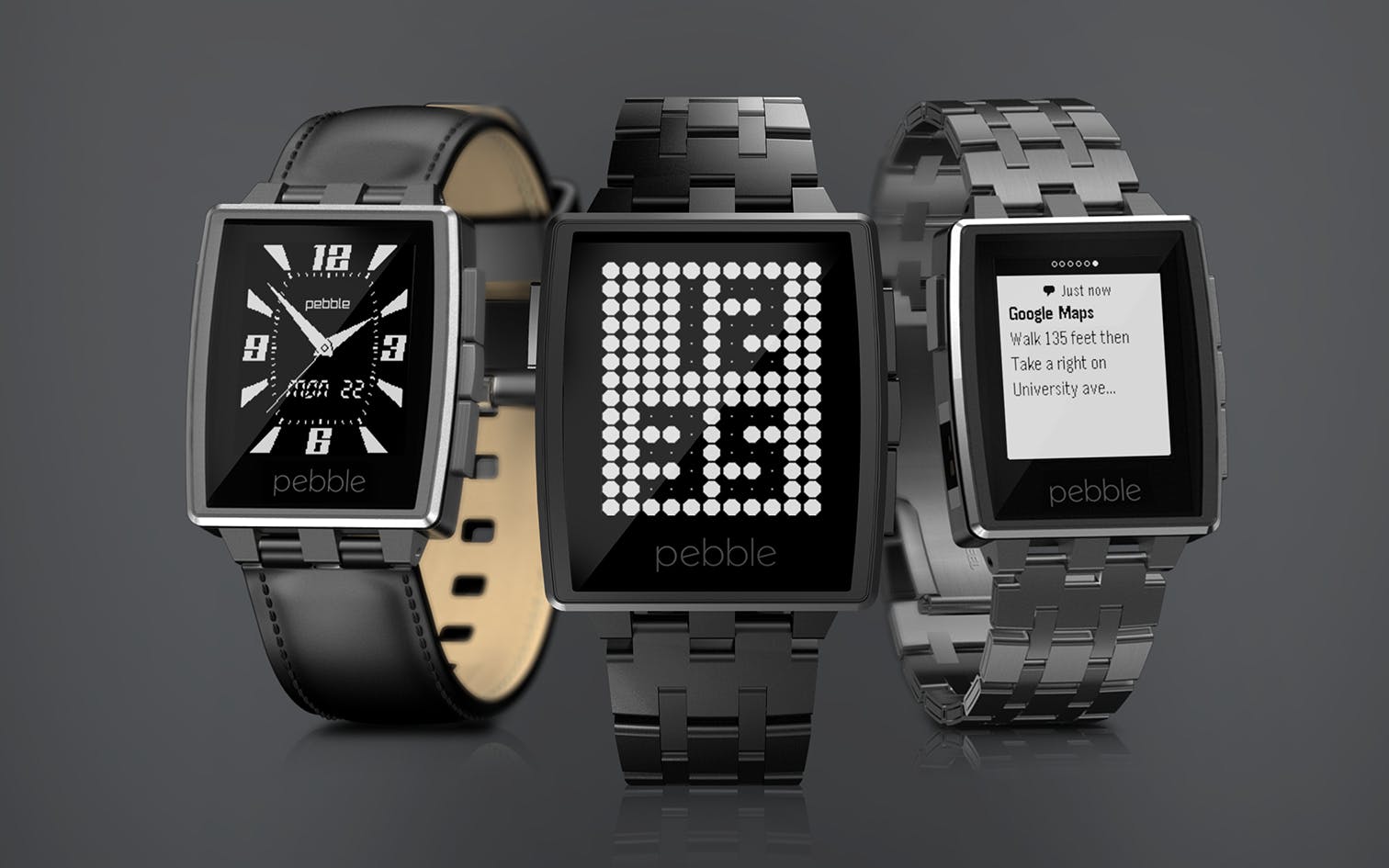 The best smartwatch is still the one that’ll last you through the day, if you ask us. Pebble isn’t perfect, but the Pebble Steel is nicely made and can go days without a charge. If you want to get texts, calls, and other notifications on your wrist for around the cost of a dumb-watch, a Pebble or Pebble Steel is still a great value.

Most fitness trackers suck, but these suck a lot less. The Fitbit One is a small, pendant-style thing, so not losing it is the main challenge. The rechargeable Fitbit One tracks steps taken and calories burned, but stuff like sleep and how many floors you’ve climbed too. For a bit less cash, you can get the teensy Fitbit Zip—eminently more losable, but it runs on a watch battery which means it can stay alive for like ever. 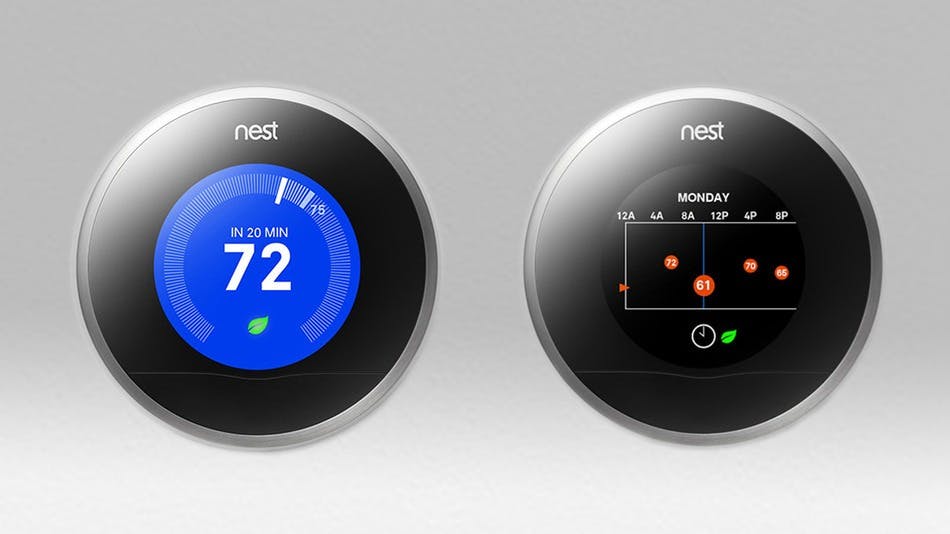 The Nest makes us want to be a homeowner… almost. There’s no cooler way to feel like the future is now than controlling your home temperature (and your monthly energy bills) by playing god with your thermostat. The Nest is simple, awesome, reasonably priced at $249, and just works—just like it should be.

If you’re after affordable accessories to help out the gadget enthusiast in your life, look no further than Quirky. The site has a solution for every kind of organizational disaster—and with an emphasis on design, their solutions are as attractive as they are practical. 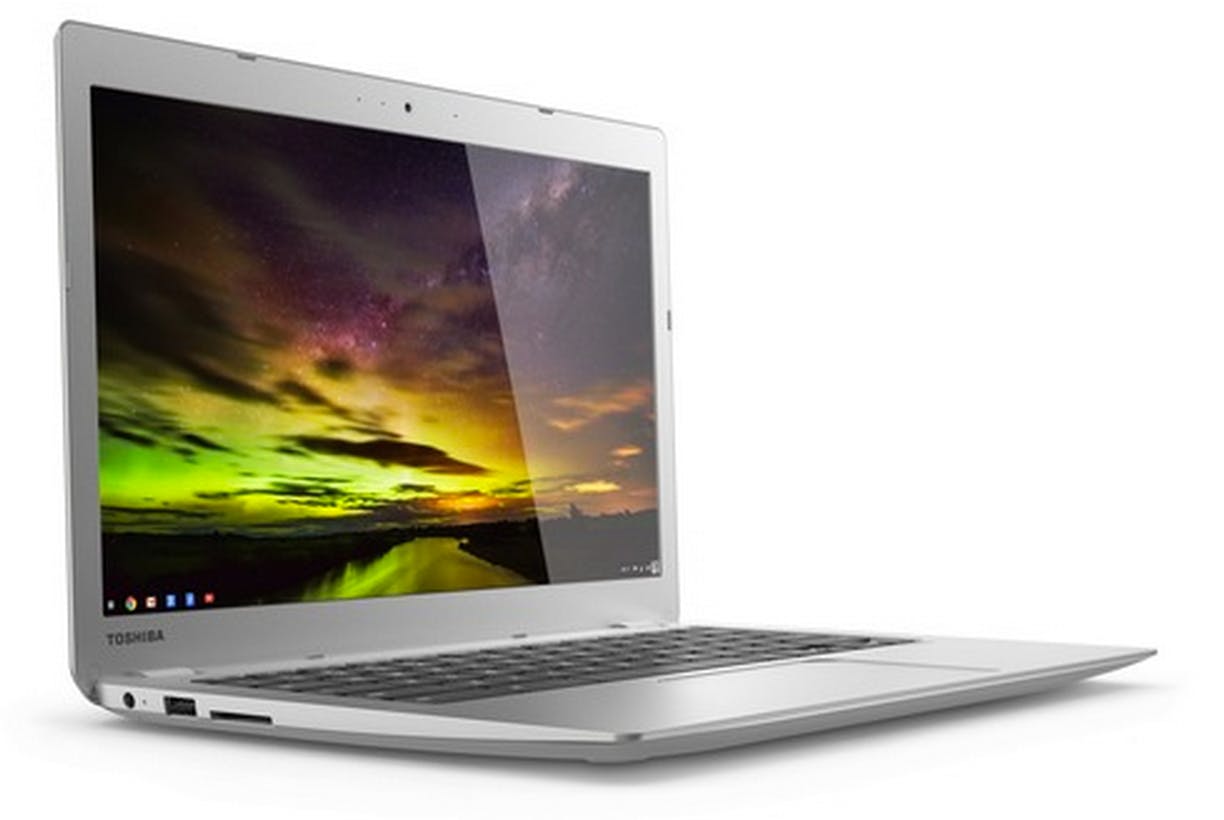 If you need a cheap, affordable way to get online, you should probably buy a Chromebook. If computing with a keyboard is still a necessity (understandably), Google’s fleet of remarkably cheap, seamless notebooks is a godsend. Chromebooks run Chrome OS, Google’s special pared-down operating system, which is optimized for the way most people end up using a computer—namely, as a big browser. The only thing complicated about Chromebooks is figuring out which one to buy, but for a well-balanced machine at a great value, we’d recommend the Toshiba Chromebook 2, a 13-inch Chrome OS notebook with a noteworthy 1080p display that feels way more refined than its sub-$300 price tag.

Chromebooks have improved across the board in 2014, but manufacturers have stuck with confusing naming schemes that don’t differentiate models very well. If you shop for one, be sure you’re choosing a model that hit in 2014.

Best smartphones
If you’re smartphone shopping, we’d point you to the essentials: the iPhone 6 and 6 Plus, the new Moto X, or the Sony Xperia Z3 Compact for something a little smaller. But you might as well take a deep dive into our dedicated smartphone shopping guide while you’re at it.

With its unrivaled polish and tablet-friendly App Store, the iPad is still a natural, well-rounded choice for a tablet computer. The iPad Air 2 and iPad Mini 3, starting at $499 and $399 respectively, are Apple’s top of the line devices these days, but the last generation is now a comparatively good deal for a company that never puts anything on sale. You can snag last year’s iPad Air and iPad Mini 2 for $399 or $299, or even less if you can find a refurbished deal. The newest iPads are screaming fast, but last year’s models still hold their own and then some. 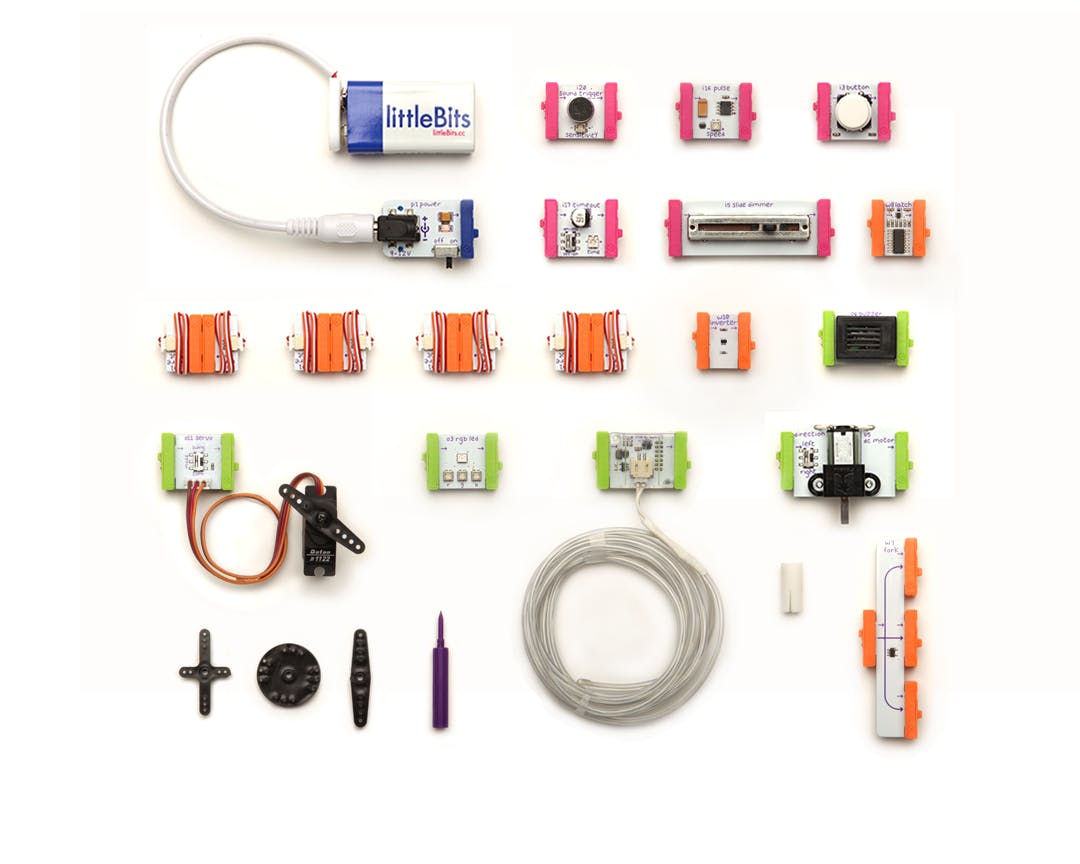 These sets of modular learning tools are fun for kids and adults alike. Instill a child with some mad hacking skills or delight a LEGO-nostalgic adult with one of the littleBits starter kits. It’s hard to explain what these do exactly, but that’s because they do anything you can think up—and that’s a gift that keeps on giving.

A powerful tool for more advanced home hacks, the Raspberry Pi is as versatile as it is affordable. Snag one for as low as $20 and follow so many other zany dreamers online who’ve taken a computer the size of a credit card to imaginative new heights—just check out YouTube for a little inspiration.

Avoid running afoul of the law while cruising the skies in your very own personal aircraft. Unmanned aerial vehicles aren’t all drone strikes and creepy surveillance… they can facilitate plenty of cool not-terrifying projects too. Parrot has been at it for a while, and the company’s AR.Drone 2.0 is a well regarded entry point into the world of drones. For something a little cheaper, check out the AR.Drone 2.0’s little sibling, the Rolling Spider Mini Drone, priced just under $100.

These rugged, iconic little cameras can go just about anywhere. The perfect gift for outdoorsy and sporty types, a GoPro is an open invitation to go forth and adventure while capturing every minute of it. At $129, the Hero is GoPro’s entry-level device, but you can up your game with the Hero3+ for $299. 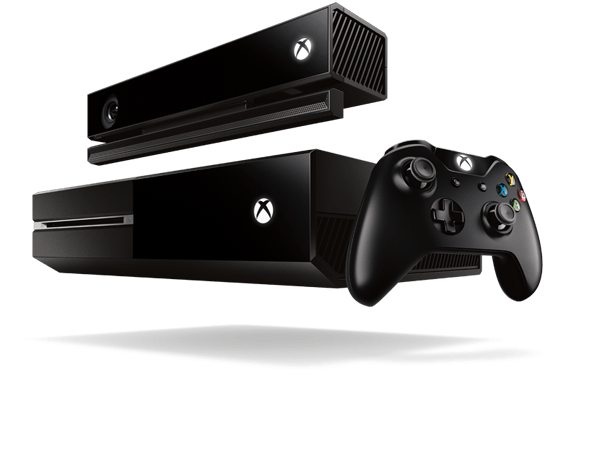 Last year, it was hard to recommend that anyone buy an Xbox One. Microsoft’s new gaming console launched with a bundled Kinect and hardly any games to speak of, but my how the times have changed. These days you can score an Xbox One without Microsoft’s creepy unblinking eye for $349—and there are even games out worth playing.

At $35, there’s really no reason not to own a Chromecast. It’s an awesome little present that punches well above its weight, especially for anyone who doesn’t already own a home streaming device. Stream Netflix, Hulu, YouTube, and an array of new Chromecast-savvy services right to any TV with an HDMI port. We might just order a handful and dole them out as last-minute gifts this year, because holy whoa this device shook things up.

As far as e-readers go, no one yet has Amazon beat. The company’s e-book policies have drummed up plenty of controversy, but it’s hard not to love the latest evolution of the Kindle, which is more affordable and easy-on-the-eyes than ever. From the entry-level $79 Kindle to the higher resolution display on the mid-tier Kindle Paperwhite and the high-end Kindle Voyage, if you want to read electronically, Kindle is still where it’s at. 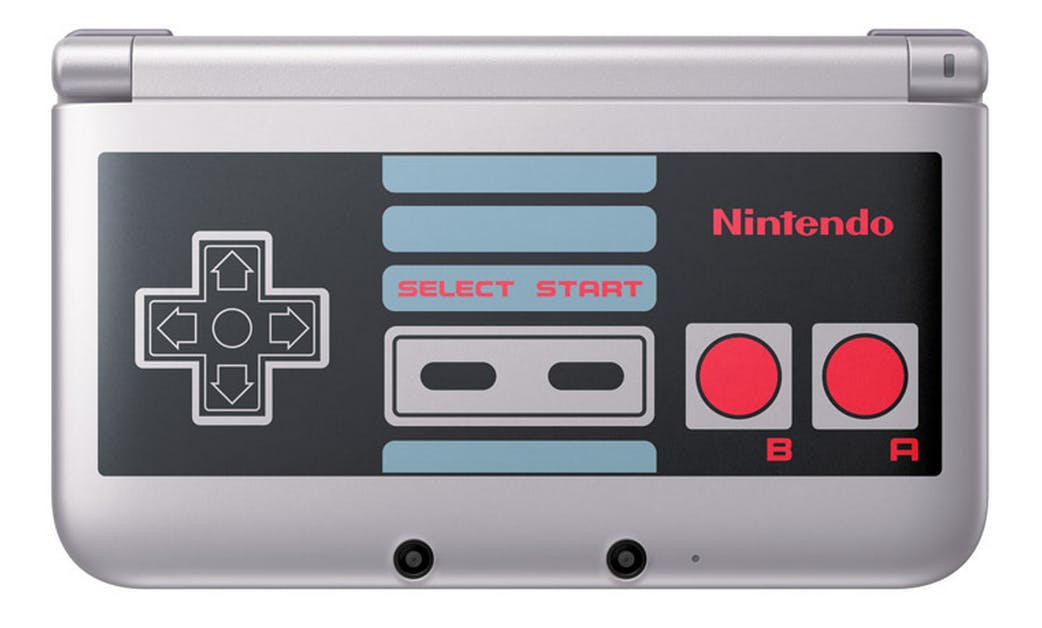 This NES-themed 3DS speaks for itself.

Our work here is done.