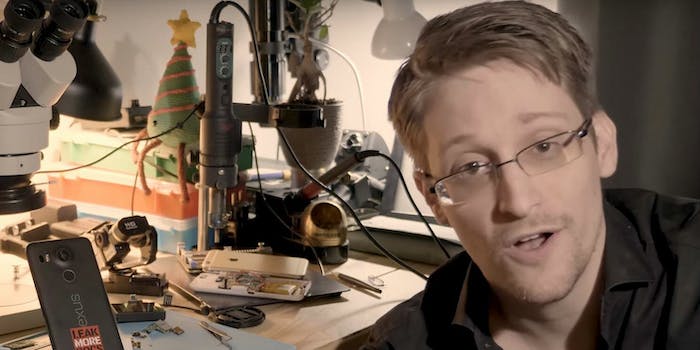 Freedom of the Press Foundation/YouTube

The app is currently only available for Android devices.

There’s finally a good use for your old Android phone—and it’s courtesy of Edward Snowden.

The famous whistleblower released an app on the Google App Store that turns any spare Android device into a multipurpose security machine. Called “Haven,” the app uses built-in smartphone technology to detect when something is going awry. If that description sounds a bit vague, it’s because the app has all sorts of use cases. In fact, its main purpose isn’t to secure your device, but to protect just about anything else—your valuables, the people around you, and even yourself.

You can watch Snowden attempt to describe it in the video below.

It protects by gathering data from accelerometers, cameras, microphones, and light sensors in your phone, and records it in an event log. For example, if your phone was nearby when someone stole your laptop, it could give you information on when the incident happened, how the robber sounded, and perhaps even how they looked. It can also determine when your phone was plugged in or removed, so if someone is trying to quickly access your private information you’ll at least have an idea of where you were and who you were with at the time.

The app’s uses are so wide-ranging, its creators—the Freedom of the Press Foundation and Guardian Project—even claim it’s the most secure baby monitor ever.

“Haven turns any Android phone into a motion, sound, vibration, and light detector, watching for unexpected guests and unwanted intruders. We designed Haven for investigative journalists, human rights defenders, and people at risk of forced disappearance to create a new kind of herd immunity,” the app’s website reads.

Haven only saves images and sounds when it detects motion or volume, and everything is stored locally on your device, so you don’t have to worry about it being sent to a cloud server. The app will send notifications to users via SMS message or the encrypted messaging app Signal once its sensors are triggered.

The Haven app is currently only available on the Google Play Store, though the company says it hopes to release an identical app on iOS soon.