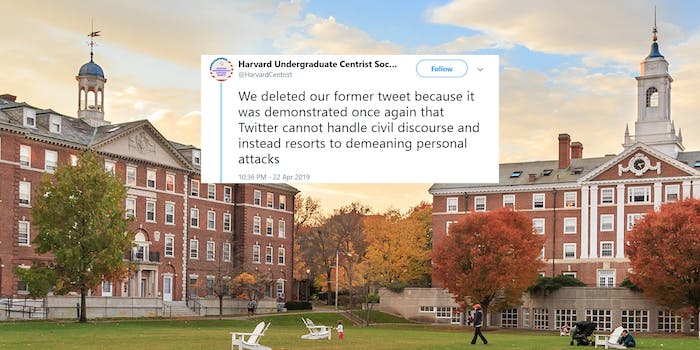 Harvard centrists get relentlessly clowned for asking Bernie about socialism

CNN held a marathon town hall event on Monday night with some of the leading Democratic contenders in 2020, including Sen. Bernie Sanders (I-Vt.), Sen. Elizabeth Warren (D-Mass), Sen. Kamala Harris (D-Calif.), and Mayor Pete Buttigieg. On Tuesday, everyone made fun of the Harvard Centrists Society for its confusing question.

During the event, Sanders was asked one of the typical inquiries about democratic socialism that he often gets, given he is the most vocal proponent in the field of radical redistribution of wealth.

Havard student Samantha Frenkel-Popell wanted to know how Sanders could support “socialism,” given that is failed in communist Russia.

Sanders answered, saying that he’s never supported authoritarianism like the question was insinuating.

Sanders said he believed America’s unequal wealth was “wrong” and that we should “have a government that should represent working families and not the 1% and powerful corporations” before pivoting to his support for free college tuition and Medicare for all.

That was that until the clip was shared by the organization Frenkel-Popell helped start, the Harvard Undergraduate Centrists Society. Founded in March, the Centrists Society doesn’t actually claim to be centrist but says it just wants to avoid the standard dichotomy in American politics.

“We want Communists, we want anarchists, we want them all. It’s just about coming with a willingness to listen. That’s all we want people to do,” the organization said in a profile.

A *Harvard* Centrist asked Bernie Sanders why he supported Russian Communism since all socialism failed everywhere.

DEMOCRATIC SOCIALISM IS NOT COMMUNISM.

Ask us to explain the difference:

That was awesome, someone that goes to Harvard should know the difference between the communist dictatorship her parents fled and democratic socialism that Sanders is proposing.

She's the VP of the Harvard Centrists society. It's not that she doesn't share his understanding she was trying to get a good jab in. It's a tired line of questioning that's been trotted out repeatedly to Sanders and he's discussed it before. She's an elitist beating a dead horse

But while the question was no doubt aggravating, the whole concept of a “Harvard Undergraduate Centrists Society” was, for many, much much worse. They were swiftly made fun of, with one user calling for them to get “wedgies.”

I hate to say it, but the Harvard Undergraduate Centrist Society would benefit greatly from a week of wedgies.

when you learn that the "Harvard Undergraduate Centrist Society" exists pic.twitter.com/BZtTFnu518

When people continued to clown on them, the organization deleted the clip, blaming the nature of Twitter (and not, maybe, the absurdity of students rallying around jaded and middle-of-the-road politics) on the backlash.

We are an organization dedicated to fostering civil discourse and promoting positive cooperation in government, regardless of an individual’s political ideology.

Even that didn’t go over well.

the closest any of these folks will get to knowing adversity is people telling them they suck on twitter https://t.co/aE1OpSVN1q

Here’s hoping they throw their weight behind Howard Schultz.