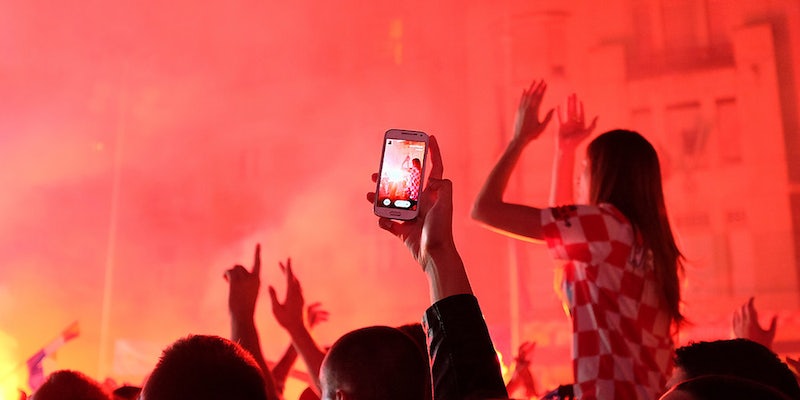 Last fall, a clip of Hannibal Buress calling out Bill Cosby during one of his standup sets went viral. An audience member had recorded the clip, and it spread far and wide, reigniting the conversation around numerous allegations against Cosby. Buress, on the other hand, received death threats.

Having set material posted online isn’t always a boon for comedians, especially if jokes are leaked out of context or spoiled for future audiences. Now, Buress has joined forces with Yondr, a San Francisco-based company that launched last year and is devoted to developing tech that encourages people to participate in the live music or comedy experience instead of attempting to document every moment.

Yondr’s tech is a case—which comes in three sizes—provided to people attending a show at a particular venue. Patrons place their phone in the case, which is then locked, but they’re still allowed to hold their phones. After the show is over, they go to an unlocking station and can use their phone again.

Graham Dugoni, Yondr’s founder, says the idea came about three years ago, and that live performances especially benefit from being phone-free zones. “You go to be swept up into the shared mood,” he says.

The urge to grab our phones and document is now muscle memory—we reach for our phones almost as a comfort. “Part of it is a biological itch that’s easy to trigger,” Dugoni says. “Moments are more enjoyable when we share them with people, and social media and phone use has stimulated that itch. It’s the salt and fat of social interaction rather than the meat and potatoes.”

Dugoni says Yondr reached out to Buress and his management about the partnership, and the comedian used Yondr at his show this past weekend in California. While not being allowed to use phones might sour some people on the live experience, Dugoni says “people were receptive. Staff told me they didn’t see a single phone.”

Dugoni adds that in addition to Buress, three other comedians are on board to use Yondr at shows. Yondr’s also being used in high school classrooms. The hope with comedy shows in particular is that the audience will engage and give performers space to riff without having to worry that what they say is being chopped into a decontextualized viral moment.

“The issue with comedy in general is an existential problem,” he says. “With comedy, if a comedian can’t have a space to go off the deep end, what are they doing up there?”