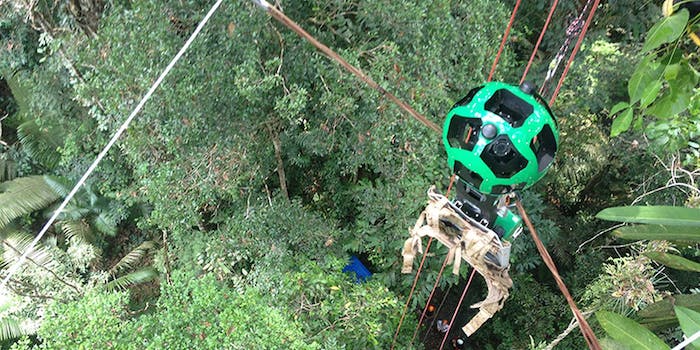 Google’s 3D cameras took a zipline through the Amazon

Google Street View can take you to far off places like the melting glaciers of Antarctica or the golden halls of the Louvre. Besides seeing some of the world’s wonders, their cameras have also had to capture horrible things like dead dogs and possible murders. So it was only fitting that a vacation was in order.

Some Google employees recently went to the Amazon rainforest and sent a 360-degree camera down a zip line to capture extreme detail from the canopies to the jungle floor.

According to the BBC, the camera “takes photos every 2.5 seconds” and “reached speeds of 62 mph” while it zoomed down the zip line.

In a blog post published Sunday, Google also shared images from an expansion of their views of the rivers of the Amazon and the tropical trails.

Google actually started mapping the Amazon rainforest back in 2011 by attaching cameras to trikes and canoes. This is the first time that the company has sent their cameras down a zip line. Google’s previous work and this project was done in conjunction with Amazonas Sustainable Foundation (FAS).