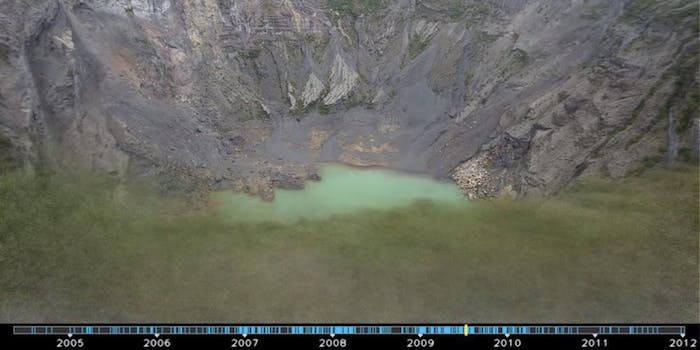 With the help of public data, we can see how much things change.

Most people probably don’t realize that their public photos of tourist attractions can be mined by data scientists to produce stunning time-lapses of popular destinations. But now, thanks to researchers at Google and the University of Washington, photographers might just spot one of their images in a photo montage highlighting how much the world is changing.

Researchers took data from 86 million publicly available, timestamped, and geo-tagged Flickr, Picasa, and Panoramio photos and adjusted them to fit the same location and viewpoint. They then edited the photos to standardize the lighting and stabilize the frames. The result is a composite time-lapse that resembles one long loop.

In a paper describing the complicated algorithms that let them mine the Internet for photos of similar locations, the researchers said that they had found 10,728 time-lapses showing construction in major cities, climate change through glaciers melting and plants growing, and other natural changes.

Other trends in the photo collection illustrate more than just changes at popular landmarks. The study also showed the technological disparity in different parts of the world; according to researchers, Europe has the most time-lapses, while there are not many in Africa and South America.

Most of the earliest images were uploaded between 2006 and 2009—in the grand scheme of things, very recently. As the years progress and people continue sharing travel photos, the researchers said, it will be possible to crowd-source data to demonstrate even greater changes to our planet.