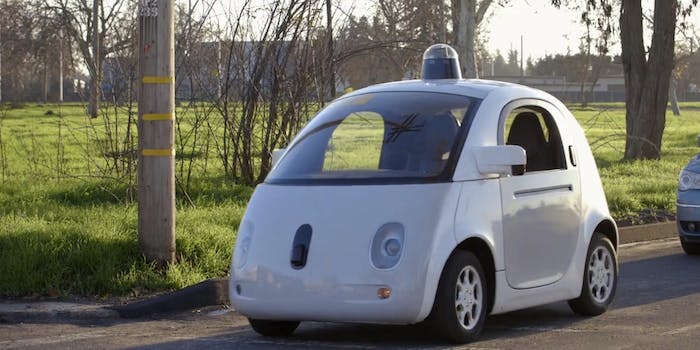 The technology giant announced plans on Friday for the next phase of testing the prototypes on the roads—they’ll start driving a few, relatively slowly, in the summer.

Google won’t unleash the autonomous cars without drivers just yet. “Safety drivers” will be behind the wheel of each car, which will have a removable steering wheel, accelerator pedal, and brake pedal. And the speed will top out at just 25 miles per hour.

The prototypes have gone through rigorous tests at Google facilities, and the futuristic-looking cars operate on the same software that Google’s fleet of Lexus RX450h SUVs use. (You might have seen those on the street already.) According to the company, the group of Lexus cars rake up 10,000 miles per week in driving time.

Eventually, Google’s self-driving car won’t need a human to ensure it gets from point A to point B safely. Google will eventually remove any controls that drivers are currently familiar with, like steering wheels, gear shifts, and brake pedals. The car itself will know when objects are in its way and understand the rules of the road—we’ll just have to type in a GPS location.

Road testing hasn’t been entirely smooth sailing for Google’s fleet already on the road. Google’s 50 self-driving cars have gotten in four accidents in eight months. All of the accidents were the fault of other cars on the road.