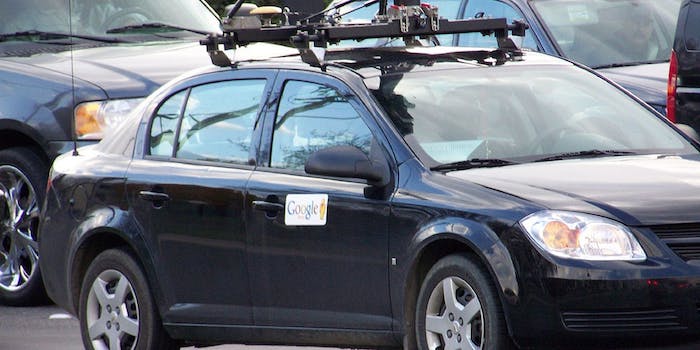 Every technology has its downside.

If you’ve ever looked up your address in Google Street View, you know you can see some pretty weird stuff on there. It’s doubtful, however, that you’ll end up seeing a PG-13 peepshow starring your own image.

That’s the situation Montreal resident Maria Pia Grillo found herself in when she looked up her address in 2009 and saw herself sitting on a street corner, leaning forward and exposing her cleavage. Grillo sued Google over the image, and a judge has now ruled that the company must her Grillo $2,250 for violating her privacy and causing her emotional distress.

According to GigaOm, Grillo initially sued Google for $45,000 after stumbling across the photo of her sitting on the front stoop of her home. Although her face was blurred in the image, as is standard practice, the rest of her body wasn’t, and the other visual clues in the photo, such as her clothes and car, were unique enough that others could identify her. As a result, Grillo argued in her suit, she suffered from depression and was mocked by her co-workers at a “well-known bank.”

At first, Google, which takes the pictures with its specially outfitted Street View cars, refused to provide Grillo with any financial compensation, arguing that because Grillo was in a public location, the company was well within its right to post the photo. Earlier this week, the judge in the case ruled that even though Grillo was in a public place, she remained entitled to her right to privacy.

This isn’t the first time Google has landed in hot water over violating someone’s privacy via Google Street View. Back in 2009, residents of a village in the UK formed a human barrier to keep Google’s photo-taking cars out of their neighborhood, saying the practice violated their privacy and citing fears that it would lead to more home invasions. Street View also faced another backlash after its UK launch it was discovered that one image depicted a man emerging from a sex shop.