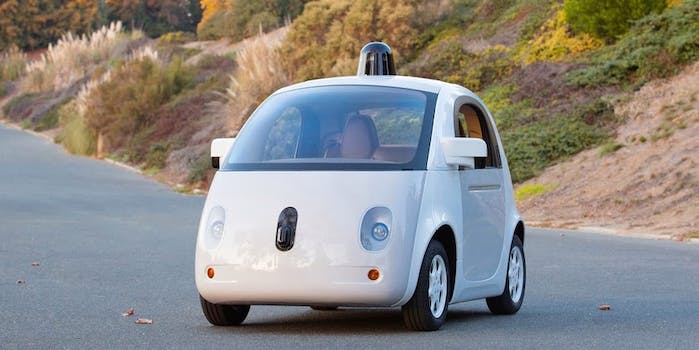 Google’s adorable self-driving cars unveiled earlier this year are finally going to hit the road, the company announced on Monday.

The cute, futuristic automobiles were a fleet of “prototypes-of-prototypes” until Google engineers tested and built a fully functional version that the company says will be tested throughout the holidays and will be seen on the streets of northern California in 2015.

Google’s self-driving cars will be completely autonomous, and will remove any physical controls including a steering wheel, pedals, and gearshift. The only thing humans will need to touch is an on and off button. The car’s sensor can detect objects up to 600 feet in front of it and maxes out at just 25 miles-per-hour.

Drivers can also call control their cars via a smartphone application, and can input a desired location via a GPS in the automobile and be taken immediately to their destination.

The driverless cars you might see driving along the California roads won’t be entirely driverless yet—Google says “safety drivers” will still have access to temporary manual controls while testing them.

Because driverless cars are a new and unexplored frontier, regulators are still figuring out how to best implement rules for company production and safety. In September, California implemented new regulations on testing and driving self-driving prototypes on the road, and companies are required to get specific permits before they can start driving among the regular cars.

Early tests of the company’s product show passengers are excited about the prospect of giving complete control of driving over to the Google car.