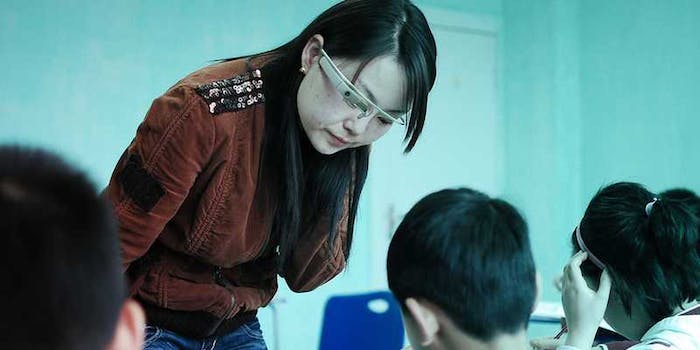 How Google Glass is leading the edtech revolution

Put down your pencils, and put on your Glass.

Andrew Vanden Heuvel knew his vision of the future classroom couldn’t be contained by four walls and a chalkboard.

“I do well as an experimental teacher outside the context of constraints and accountability,” Vanden Heuvel says. “I like to be able to fail miserably without losing my job.”

It was his passion for what he calls “crazy ideas” and a series of serendipitous dominoes that led him to becoming a Google Glass Explorer. The program launched in April 2013 to allow innovators to demonstrate how Glass could be used in targeted areas like healthcare, journalism, and education.

Vanden Heuvel has gone from classroom teacher to contract physics teacher for a number of virtual schools in Michigan. His path was lit by a series of contests that opened up new technology avenues and opportunities to him. A NASA contest for educators, who used new twists on teaching about space, led to him working with USA Today on creating a curriculum for a learning project that led him to becoming a virtual physics teacher. And when Google Glass’s call for Explorer project submissions caught his eye, his life took yet another step toward becoming an edtech pioneer.

“I like to be the guy who dreams up crazy ideas rather than being just another cog in the machine,” Vanden Heuvel says. “My goal is to help kids find something they can be passionate about.”

Vanden Heuvel’s submission to Google detailing how he’d use Google Glass caught the company’s attention, and in addition to being selected to buy (yes, selected to buy Glass) the AR technology, he was asked to travel to CERN to create an immersive video tour of the Swiss scientific research center.

After seeing how Google Glass’ AR capabilities can be used to create engaging videos, Vanden Heuvel created a series of Bill Nye-meets-Daft Punk videos called StemBite. Each of Vanden Heuvel’s more than 60 short clips presents a basic principle of physics as demonstrated through first-person experimentation. For the more advanced, there is a clip on Bernoulli’s Principle, and for more general audiences, there’s some insight into the world of sand dunes. Yes, Grand Haven, Mich., is surrounded by sand dunes.

Vanden Heuvel’s influence goes far beyond his work with Google Glass. Brian Rellinger, executive director of Information Technology at Ohio Wesleyan University (OWU), cites Vanden Heuvel’s work on StemBites as intriguing and a catalyst for experimenting with the technology. Rellinger explains that OWU has always been an institution favoring the use of edtech to enhance not only the learning experience, but to touch on other aspects of student life.”

“We are always looking for ways to support our talented faculty and students at OWU. Our services range from basic course management system support, to flipped classroom technologies and everything in between,” says Rellinger. “We discuss new trends with our faculty to identify opportunities to enhancing teaching and learning.  This includes mobile apps, electronic polling systems, etc. Our instructional technologist, David Soliday, actually sits in classes with faculty members that are interested in using technology. He works to match the technology available with the course content and design where it makes sense.”

The challenge of learning how to use the device is a bit off-putting at first, but Rellinger says it took him 20 minutes to get the hang of it.  He believes as the technology platform evolves, it will become even easier to use.

“Certainly the ease of use and some initial eye strain were challenges,” notes Rellinger. “I think many are reluctant to use the device for aesthetic reasons, but I’m certain that will be reduced and refined in future version of Glass.”

Rellinger is particularly proud of two Google Glass creations done at OWU—one presents a student’s eye view of commencement, while the other is a series of lab experiments, also seen through the eyes of a student. “Glass allows the technology to fade into the background, thereby allowing the focus to be on the actual event,” Rellinger says.

Google Glass has also impacted education by trying to help those who struggle to have more access to the classroom. For instance, Glass has given the nonprofit Classroom Champions, led by former Olympic gold medal-winner Steve Mesler, the ability to reach and inspire at-risk youth for whom a little inspiration goes a long way.

Classroom Champions started with short videos from Mesler’s travels around the globe. He says his message was clear from the outset: “I showed them I cared. I wanted to show them things that I thought would have been amazing when I was their age.”

Classroom Champions was one of five education-based organizations to win a $25,000 grant from Google’s “Giving through Glass” program, as well as a pair to be used to showcase the technology’s power to change students’ lives. In the case of Classroom Champions, Google Glass is being used by three-time silver medal-winning Paralympian Lex Gillette, who has been blind since age 9, to share his world with students who learn the extraordinary courage it takes to achieve lofty goals even when hampered with physical challenges.

Mesler’s sister Leigh Mesler Parise, Ph.D., who also works on the project, says that her brother’s videos resonate with at-risk youth and that 88 percent of kids whose teachers were involved in Classroom Champions said that the athletes they met via videos were their friends. “Friends are the most important thing in their life,” says Mesler, “And we want to show them a path which involves setting goals and working toward them.”

Currently Classroom Champions includes 11 Olympic mentors (who work all year-round, interacting with between 40 and 50 classrooms) and six to seven Olympic ambassadors as part-time contributors. As the organization grows, Mesler hopes to include champions from other walks of life, such as the arts, whose stories of achievement can provide inspiration and learn the power of perseverance.

”(These students) don’t have these kinds of people in their lives,” Mesler adds. “We want them to feel like they are something special.”

Photo by Renato Ganoza/Flickr (CC BY 2.0) | Remix by Max Fleishman